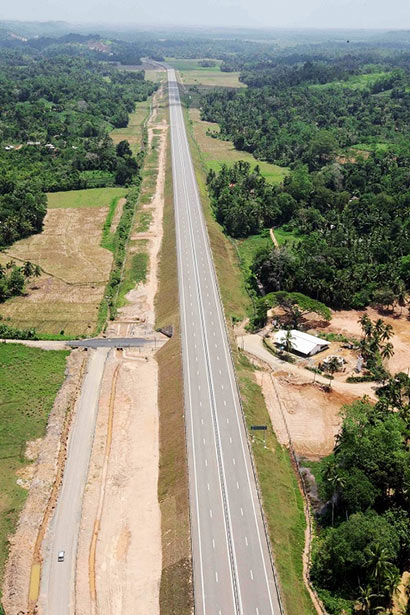 A special ceremony to mark this occasion will be held at Godagama, Matara under the patronage of President Mahinda Rajapaksa today.

The Southern Expressway is Sri Lanka’s first E Class highway.  With the opening of the second phase , the 126 km (78 mi) long highway will link the Sri Lankan capital Colombo with Matara, a major city in the south of the island. Construction on the highway began in 2006 and the first phase from Kottawa to Pinnaduwa in Galle  was declared open on 27 November 2011.

The  section from Pinnaduwa in Galle to Godagama in Matara will have two interchanges at Imaduwa and Kokmaduwa, four bridges, 46 underpasses and 12 box culverts. The project costing US$ 180 million was funded by the Exim Bank of China.

Under the third phase, the Southern Expressway will be extended from Matara to Hambantota connecting the Mattala International Airport to Colombo. The construction of the 75 km segment from Matara-Godagama to the Hambantota harbour via Beliatta, Andarawewa and Mattala will commence next month.