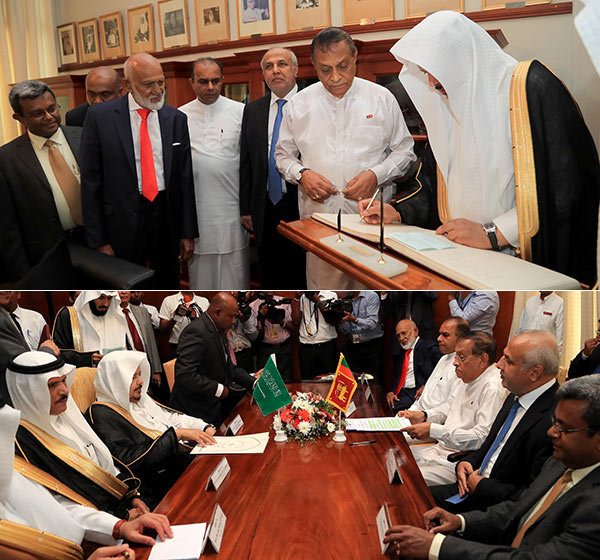 He said this at the bi – lateral discussions held with the Parliamentary delegation led by Dr.Abdullah Bin Mohammed Bin Ibrahim Al-Sheikh, President of the Shura Council of Saudi Arabia on the 09 th September at Parliament. The visiting delegation was received by Speaker Jaysuriya, Parliamentarians Rauf Hakeem, A.H.M Fauzi and Mujaibur Rahman and Secretary General of Parliament Dammika Dasanayake. They were hosted for a tea and bi – lateral discussion by the Speaker.

The speaker also conveyed Sri Lanka’s appreciation for the very progressive steps introduced by Saudi Arabia through Musaned System in solving labour related matters. These steps are much innovative compared to the systems in place in other countries in the region. These processes have immensely helped the Sri Lankan workers mainly in the domestic and non-skilled categories.

When the Speaker mentioned the terror attacks on the Easter Sunday has shocked the country but now coming back to normalcy with steady speed of resilience and appreciated the support extended by the Saudi Arabian authorities to arrest and repatriate some of the most wanted people who are connected to these attacks the Speaker of Saud Arabia said that they are willing to work closely with Sri Lanka to eradicate terrorism.

The Speaker also emphasized that the Sri Lanka Government has brought to the notice of Saudi authorities the differences of the causes of deaths indicated Saudi post-mortem reports and Sri Lankan post-mortem reports, and those have not been addressed positively by the Saudi Authorities. He pointed out it is important to establish mechanism in obtaining compensation in short time period as there is a considerable delay in receiving cheque of End Services Benefit, handed over by the sponsor to the Saudi Labour Department.

They also discussed that Sri Lanka’s trade with Saudi Arabia has been significant over the past thirteen years. Saudi Arabia is the in Sri Lankan import market standing as 23th import partner while Sri Lanka is ranked as 82th import partner in Saudi Arabian import basket. Total trade stood at U$ 327.77 million in 2018. Tea, food items, apparel, coconut products, spices, rubber products, cut flowers are among the main export commodities from Sri Lanka.