SPORT A MAFIA IN THE HANDS OF DRUG DEALERS, CASINO OPERATORS, SAYS ARJUNA 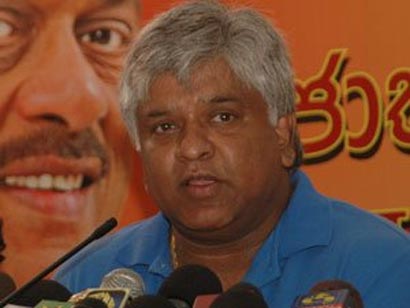 Sport is a mafia in the hands of drug dealers and casino operators, says parliamentarian Arjuna Ranatunga.

Addressing a function at Kalutara yesterday, the parliamentarian of the Democratic National Alliance (DNA) said that said that except for cricket, there has been a downfall in all other sports in the island.

“Except for cricket, there has been a downfall in all other sports. The reason is the increase in robbery and corruption from top to bottom.

“Sports has fallen into the hands of drug dealers and casino operators. The government should take into consideration the fate of our young generation under such a backdrop.

“All the persons who robbed were allowed to continue in service, but I was sent home. It’s that type of government that’s in power today.

“Development of a country is not mere constructing roads and buildings. First, the people should be developed and the youth should be protected,” said Arjuna.

12 Responses to SPORT A MAFIA IN THE HANDS OF DRUG DEALERS, CASINO OPERATORS, SAYS ARJUNA