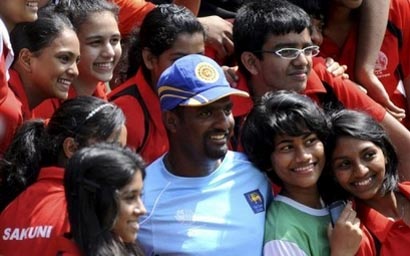 “My role for this World Cup is to take as many wickets as possible,” says the 38-year-old off-spinner. “I just want to focus on my performance and not think about anything else.

“My aim is to put up my best for Sri Lanka.”

The world’s leading wicket-taker in both Tests (800) and one-dayers (517), Muralitharan bowed out of Test matches in July last year after the opening game against India in Galle.

He recently announced that he would quit one-day internationals as well after the World Cup, which starts on February 19 in Dhaka.

Sri Lanka, co-hosting the showpiece event with Bangladesh and India, last lifted the World Cup in Lahore in 1996 and were the losing finalists of the 2007 edition.

Muralitharan admitted there had been growing pressure from home fans to repeat the 1996 feat.

“A win would be a memorable one for me and for Sri Lankan fans,” he said. “A winning team is made up of players who have that mindset. It ultimately rests in the players’ hands, how well we play and how well oppposing teams play.” He declined to compare the present team with the one that won in 1996, saying playing technique and conditions had changed over time. Looking backwards, he says, won’t help.

“1996 was one of the greatest moments for us. It put Sri Lanka on the world map. The cricket world started to take us seriously. The team has now got more professional and expectations are much higher,” he said.

“This time, from the first step onwards, things have to work for us, whether it’s our performances, confidence levels or even peaking at the right time. I also believe we need blessings of the gods and a little bit of luck too.”

Sri Lanka have been placed into Pool A with defending champions Australia, Pakistan, New Zealand, Zimbabwe, Kenya and Canada.

The island will host 12 World Cup matches, including three at a new 22,000-seater stadium in Murali’s home district of Kandy.

The other nine matches will be played at the renovated Premadasa Stadium in Colombo and a new cricket facility in Hambantota in the island’s south.

Muralitharan said Sri Lanka had the advantage of playing at home and players were accustomed to the wickets and weather conditions.

“The disadvantages are minimal, unless we go out and play badly.”

He declined to pick favourties for the tournament, saying all the 14 teams in fray had enough experience of playing in the sub-continent.

“In the end, it boils down to the team that takes it one match at a time.”