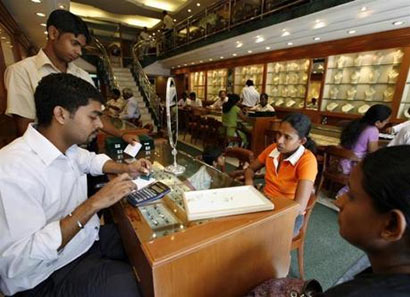 (Reuters) – Sri Lanka scrapped a 100 percent surcharge on gold imports and cut import duty with immediate effect, officials said on Friday, after measures imposed in mid-2013 to curb purchases of the metal from abroad halted them completely in the third quarter.

Sri Lanka placed a 10 percent duty on gold imports in June to discourage traders who were buying it abroad then smuggling it from Sri Lanka to top gold consumer India, where prices for the metal were higher. It later followed up with the 100 percent surcharge.

It was responding to a 47.1 percent year-on-year jump in gold imports to $200.2 million in the first half of 2013 and the measures proved extremely effective – central bank data shows there were no imports of the precious metal in the third quarter.

“The duty and surcharge were temporary, in line with neighbouring country policy action, to deal with the surge in gold prices and outflows,” P.B. Jayasundera, the secretary to the finance ministry and treasury told Reuters, referring to India’s own measures to tackle the problem.

The surcharge and higher duty were adopted partly because gold had assumed such a large role in bank lending that it exposed the country’s banking industry to excessive risk.

Sri Lanka last year saw a surge in gold pawning, a popular method of borrowing against the metal, and commercial banks’ exposure to this grew 20 percent year-on-year to around 339.4 billion rupees in 2012. It amounted to about 14.4 percent of the year’s total loans, central bank data showed.

A sudden fall in the price of gold in the middle of this year exposed Sri Lanka’s banking industry to the risk of a rise in non performing loans (NPL) associated with pawning, a Standard and Poors’ report said in August.

“A 7.5 percent duty is reasonable, given gold prices are getting stabilised. Banks should do better as losses will be less,” Jayasundera said.

“Since banks have already taken measures to minimise the impact, we don’t see any issues with banks now,” he said.

Sri Lanka’s customs service said on Thursday it had revised the rules for the amount of gold that can be worn by local people leaving the country, after 56 Sri Lankans were arrested for gold smuggling in India.

The value of gold imports in the first nine months of this year rose 27 percent from $157.6 million in the same period last year.

Gold imports sank to $170 million in 2012, from a record $604 million in 2011, after the central bank twice tightened monetary policy and adopted a flexible exchange rate.