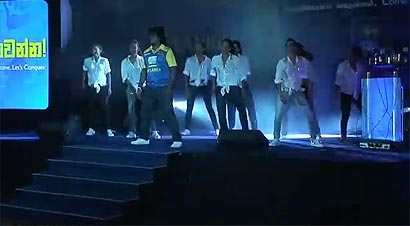 COLOMBO: A World Cup song which carries threats against defending champions Australia as well as earthquake-hit New Zealand has been banned on orders of the Sri Lankan president.

The song warns that Ricky Ponting’s Australians will end up as bird food while New Zealanders, still reeling from the Christchurch quake, could have their jaws broken.

President Mahinda Rajapakse heard the Sinhalese and Tamil mixed song and wanted it taken off all state-run radio and television channels, an official close to the president told AFP.

He also censured sports authorities for allowing the “insulting” lyrics.

“The president was appalled that the song was allowed in the first place,” the official said.

“He felt the song was in poor taste. What he wants is a song to inspire the team and fans and not insult other nations.”

The president saw a video clip of the song when he turned up to watch Sri Lanka play Canada at their opening game at Hambantota on Sunday when the home side won by 210 runs.

A Sri Lankan cricket official said the song was the initiative of a private company which was sponsoring the national team.

Several private radio and television channels have also accepted that the song was in poor taste and stopped broadcasting it.

Sri Lanka, who are co-hosting the World Cup with Bangladesh and India, has already run into trouble with fans after banning music and placards at match venues.