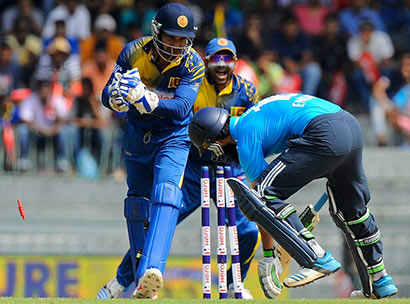 Sri Lankan spinners combined for nine wickets before Kumar Sangakkara hit 86 runs to help the hosts to a tense six-wicket win over England in the fourth one-day international on Sunday.

Electing to bat first, England was 265 all out in 50 overs and Sri Lanka chased down the runs with only two balls to spare, finishing on 267-4 at R. Premadasa Stadium.

Sangakkara’s innings came off 105 deliveries and included seven boundaries. He shared 96 runs in 103 deliveries with Mahela Jayawardene (44) for the third wicket.

Needing three runs to win in three deliveries, captain Angelo Mathews (51 not out) hit a boundary to complete the win as well as his 25th one-day half-century.

“I was a bit nervous at the end, but I knew we had wickets in hand,” Mathews said.

Chris Woakes dismissed opener Tillakaratne Dilshan (16) early in Sri Lanka’s chase, caught by Morgan. Off spinner Moeen Ali induced an edge off Kusal Perera (31) for a catch to Chris Jordan at slip to leave the hosts at 69-2. But Sangakkara and Jayawardene then combined to lay a solid foundation.

England took the match until the final over and it required an unbroken 53-run partnership between Mathews and Lahiru Thirimanne (19 not out) for Sri Lanka to clinch victory. But Alex Hales dropping Mathews at 33, when Sri Lanka needed a run-a-ball 24 to win, and some wayward bowling resulting in 12 wide balls did not help England’s cause.

Earlier, James Taylor made his maiden international fifty — but missed out on a century — to give England a strong platform. Playing his third match, Taylor scored 90 runs off 109 balls and was involved in an important 93-run partnership for the third wicket with Joe Root (36) after the tourists lost two wickets for 29 runs.

Morgan hit four boundaries and three sixes for a 47-ball 62 before England’s captain was out to the last delivery of the innings. Regular captain Alastair Cook served a one-match suspension for a slow over rate in the third game that England won in Hambantota.

Hales was out for a first-ball duck Sunday in the second over of the match bowled by seamer Dhammika Prasad, caught by Jayawardene. Ali was caught behind for 19 in 20 deliveries. Taylor and Root then rebuilt the innings over 18 overs before left-arm spinner Herath bowled Root. Sri Lanka leads the seven-match series 3-1 and the fifth match will be played in Pallekele on Wednesday.