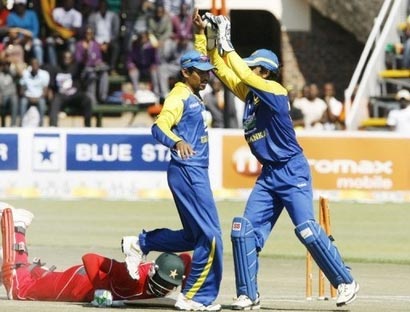 HARARE (AP)—An unbeaten century by Tillakaratne Dilshan guided Sri Lanka to a crushing nine-wicket victory over Zimbabwe on Wednesday in the final of the limited overs tri-nation series at Harare Sports Club.

The Sri Lanka captain was pleased to get back in the runs, with the four-nation Asia Cup coming up later this month.

“I am delighted with my performance and getting my form back,” he said. “I want to take it into the Asia Cup and continue playing positive cricket.”

Dilshan’s seventh one-day international century featured 14 boundaries and helped build an opening stand with Upul Tharanga of 160 as they punished some loose bowling from the home side.

Tharanga added 72 before Graeme Cremer eventually removed him from the crease after a needless run out in the 26th over.

Tharanga’s half century came off 79 balls and he had smashed eight boundaries before the run out.

At that point, Sri Lanka’s victory was inevitable and the Zimbabweans’ body language showed they had conceded the defeat against a side they beat by eight wickets in the final round-robin match.

“We had a few words just before the game (today) and it was more mental,” said Sri Lanka coach Trevor Bayliss. “The players realised that the final was the big one.”

Dilshan finished off the chase together with Dinesh Chandimal, who ended the match unbeaten on 16 as they reached the total wth 15 overs to spare.

Seam bowler Dilhara Fernando caused most of the damage, finishing with figures of 3-36 in his nine overs, while Jeevan Mendis took 2-36.

Zimbabwe captain Elton Chigumbura said: “The Sri Lankans bowled well and never allowed us to get away. I thought we just did not apply ourselves.

“We have played some good cricket throughout the series and I do not think we have to concentrate too much on today?s result.”

Zimbabwe wicketkeeper-batsman Tatenda Taibu provided resistance in the middle order, chipping in with 71 from 93 balls before being dismissed by an excellent one-handed diving catch by Chamara Kapugedara off Fernando in the 36th over.

Greg Lamb had the second best score of 37, but the rest of the home side’s batting order failed to find runs on a track that offered some turn.

“I am really happy with our all-round performance and I am also happy for the young players, especially Chandimal and Jeevan,” said Dilshan.