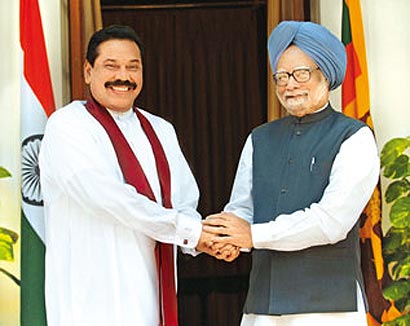 India and Sri Lanka yesterday agreed to further harness the enormous potential available for consolidating and strengthening the bilateral partnership by building on shared values and principles of democracy and pluralism.

In the joint declaration issued following the meeting between President Mahinda Rajapaksa and Indian Prime Minister Dr.Manmohan Singh it was noted that India-Sri Lanka relations have matured and diversified with the passage of time , encompassing all areas of contemporary relevance including trade , services and investment, development cooperation, science and technology, culture and education.

The President and the Indian Prime Minister agreed that the shared cultural and civilizational heritage of India and Sri Lanka and the extensive people to people interaction provided the foundation to build a viable and multifaceted partnership.

Both leaders reiterated their mutual commitment to substantially enhance the range and depth of the India-Sri Lanka bilateral relationship including through greater economic integration, enhancing connectivity and other linkages and closer development cooperation.

In this context both leaders agreed to revive the Joint Commission mechanism and hold the next meeting of the Joint Commission, co-chaired by the two ministers of External Affairs , in the second half of 2010 to devise a fuller agenda of bilateral cooperation in various fields. Prime Minister Dr. Manmohan Singh, congratulated Sri Lanka President Mahinda Rajapaksa, on his recent electoral victories and conveyed that the recent elections, together with the cessation of hostilities in Sri Lanka in May 2009, provided a historic opportunity for the country’s leaders to address all outstanding issues in a spirit of understanding and mutual accommodation and to work towards genuine national reconciliation.

The Prime Minister emphasised that a meaningful devolution package, building upon the 13th Amendment, would create the necessary conditions for a lasting political settlement. The President reiterated his determination to evolve a political settlement acceptable to all communities.

According to the joint declaration the President of Sri Lanka expressed appreciation for India’s substantial and generous assistance including through a grant of Indian Rupees 500 crore for the humanitarian relief, rehabilitation and resettlement of Internally Displaced Persons (IDPs).

He noted that the steps taken by India for humanitarian assistance, including supply of family packs of food and clothing, medicines, setting up of a field hospital and an artificial limb fitment camp and for the resettlement of IDPs, including provision of shelter material, cement bags and agricultural implements and deployment of de-mining teams, were important and timely.

Both leaders agreed on the urgent need for the resettlement of the remaining IDPs, along with speedy rehabilitation, reconstruction and development in the North and East of Sri Lanka.

They agreed to work closely towards this end.

With regard to the task of reconstruction in northern Sri Lanka, the Prime Minister reiterated India’s support for various infrastructure projects.

The President expressed his appreciation for the generous and concessionary credit facilities amounting to about US$ 800 million offered by India for the railway projects in Sri Lanka. The two leaders directed that the relevant agreements on the lines of credit for requisite amounts be concluded within two months, so that there is no delay in the commencement of the projects.

Recognizing the considerable benefits from greater economic cooperation between the two countries, the two Leaders noted the progress achieved under the India-Sri Lanka Free Trade Agreement.

They agreed that it would be timely to build on this achievement through a more comprehensive framework of economic cooperation, best suited to the two countries.

In this context, they directed the concerned officials of the two countries to hold intensive consultations towards developing a framework for sustainable economic partnership between the two countries and addressing outstanding issues.

In the joint declaration Indian Prime Minister and the President agreed that there was great potential for the further and rapid expansion of bilateral agricultural cooperation and collaboration in livestock development between the two countries.

The two leaders agreed to enhance cooperation in the energy sector. In this connection, they welcomed greater cooperation between the public and private sector entities and emphasised the need to cooperate further.

They were briefed on the progress in discussions between the National Thermal Power Corporation of India and the Ceylon Electricity Board on the establishment of a joint venture for building a 500 MW coal-fired power plant at Sampur (Trincomalee), incorporating environmentally friendly technologies, with the Sri Lankan Government providing the requisite infrastructure support.

The concerned parties have agreed to complete their discussions on the Joint Venture Agreement, the Power Purchase Agreement, the Agreement with the Board of Investment of Sri Lanka, the Implementation Agreement and other relevant arrangements within three months, so that the work on the project can commence without delay.

The President proposed discussions on the matter of establishing a joint information mechanism on the possibility of oil and gas fields straddling the India-Sri Lanka Maritime Boundary.

The Prime Minister assured the President that this proposal would receive the Indian Government’s attention and the matter could be discussed further between the two sides.

According to the joint dedication the two leaders agreed that both countries should enhance links in the educational sector as a core component of their bilateral engagement. In this context, the two leaders announced the launching of an “India-Sri Lanka Knowledge Initiative”.

* India announced an expansion of its scholarship programs in Sri Lanka, including increasing their numbers, introducing new scholarship schemes, addressing special needs of Northern and Eastern Sri Lanka and upcountry areas and ensuring wider outreach throughout the country.

* Both sides agreed to promote linkages between Indian and Sri Lankan universities and institutions of higher learning.

Both leaders expressed their satisfaction at the outcome of the State Visit by the President of Sri Lanka to India, which provided further testimony to the continuing excellent relations between the two countries. The President also invited the Indian President and the Prime Minister to pay early visits to Sri Lanka. The invitations were accepted with appreciation.