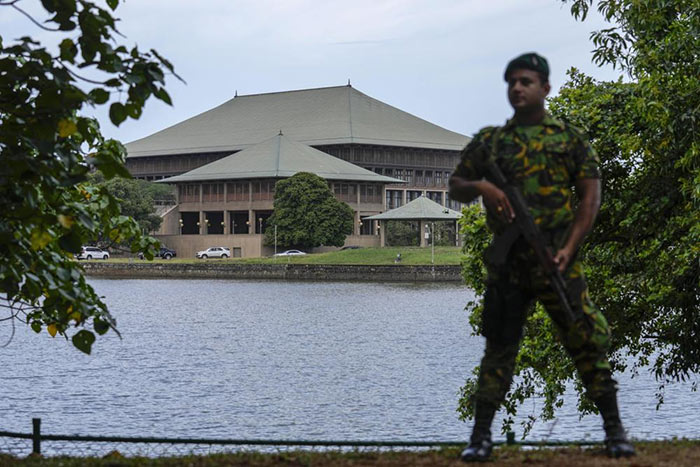 Sri Lankan lawmakers met Saturday to begin choosing a new leader to serve the rest of the term abandoned by the president who fled abroad and resigned after mass protests over the country’s economic collapse.

A day earlier, Sri Lanka’s prime minister was sworn in as interim president until Parliament elects a successor to Gotabaya Rajapaksa, whose term ends in 2024. Parliament Speaker Mahinda Yapa Abeywardana promised a swift and transparent political process that should be done within a week.

The new president could appoint a new prime minister, who would then have to be approved by Parliament.

Parliament’s secretary general, Dhammika Dasanayake, said during a brief session on Saturday that nominations for the election of the new president will be heard on Tuesday and if there is more than one candidate, the lawmakers will vote on Wednesday.

In the letter, Rajapaksa says he was stepping down following requests by the people of Sri Lanka and political party leaders. He notes that the economic crisis was looming even when he took office in 2019 and was aggravated by frequent lockdowns during the coronavirus pandemic.

Security around the Parliament building in the capital, Colombo, was heightened on Saturday with armed masked soldiers on guard and roads near the building closed to the public.

In a televised statement on Friday, Prime Minister Ranil Wickremesinghe said he would initiate steps to change the constitution to curb presidential powers and strengthen Parliament, restore law and order and take legal action against “insurgents.”

It was unclear to whom he was referring, although he said true protesters would not have gotten involved in clashes Wednesday night near Parliament, where many soldiers reportedly were injured.

“There is a big difference between protesters and insurgents. We will take legal action against insurgents,” he said.

Wickremesinghe became acting president after Rajapaksa fled Sri Lanka on Wednesday and flew first to the Maldives and then to Singapore. Many protesters insisted that Wickremesinghe too should step aside. 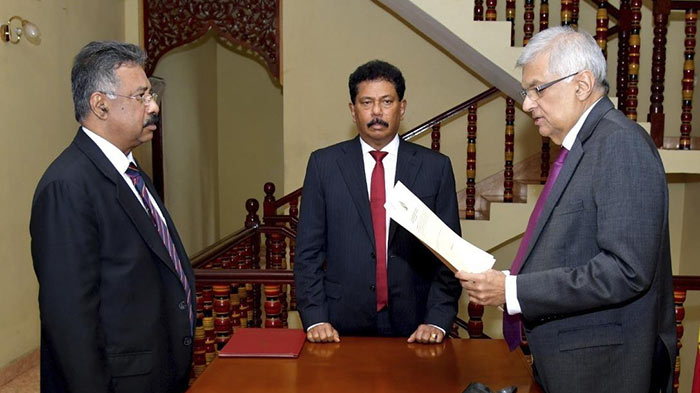 Meanwhile, Sri Lanka’s opposition leader, who is seeking the presidency, vowed to “listen to the people” and to hold Rajapaksa accountable.

In an interview with The Associated Press from his office, Sajith Premadasa said that if he wins the election in Parliament, he would ensure that “an elective dictatorship never, ever occurs” in Sri Lanka.

“That’s what we should do. That is our function — catching those who looted Sri Lanka. That should be done through proper constitutional, legal, democratic procedures,” Premadasa said.

Sri Lanka has run short of money to pay for imports of basic necessities such as food, fertilizer, medicine and fuel for its 22 million people. Its rapid economic decline has been all the more shocking because, before this crisis, the economy had been expanding, with a growing, comfortable middle class.

The protests underscored the dramatic fall of the Rajapaksa political clan that has ruled Sri Lanka for most of the past two decades.

The Rev. Jeewantha Peiris, a Catholic priest and protest leader, said the country had “come through a hard journey.”

“We are happy as a collective effort because this struggle of Sri Lanka was participated by all the citizens of Sri Lanka, even diaspora of Sri Lanka,” he said.

Sri Lanka remains a powder keg, and the military warned Thursday that it had powers to respond in case of chaos — a message some found ominous.

The speaker urged the public to “create a peaceful atmosphere” for the democratic process and for Parliament to “function freely and conscientiously.”

Sri Lanka is seeking help from the International Monetary Fund and other creditors, but its finances are so poor that even obtaining a bailout has proven difficult, Wickremesinghe recently said.

The protesters accuse Rajapaksa and his powerful political family of siphoning money from government coffers and of hastening the country’s collapse by mismanaging the economy. The family has denied the corruption allegations, but Rajapaksa acknowledged that some of his policies contributed to Sri Lanka’s meltdown.

Maduka Iroshan, 26, a university student and protester, said he was “thrilled” that Rajapaksa had quit, because he “ruined the dreams of the young generation.”

Months of protests reached a frenzied peak last weekend when demonstrators stormed the president’s home and office and Wickremesinghe’s official residence. On Wednesday, they seized his office.

The demonstrators initially vowed to stay until a new government was in place, but they shifted tactics Thursday, apparently concerned that an escalation in violence could undermine their message following clashes outside Parliament that left dozens injured. 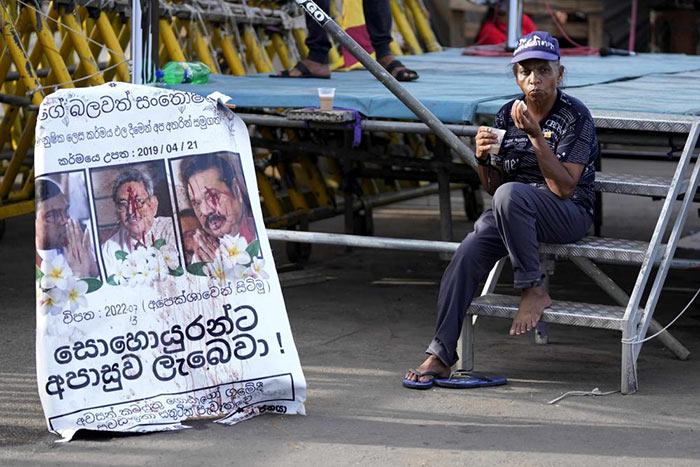 A protester drinks a cup of tea as she sits by a defaced poster carrying portraits of ousted president Gotabaya Rajapaksa, centre, and his brothers at the entrance to president’s office in Colombo, Sri Lanka, Friday, July 15, 2022. (AP Photo / Eranga Jayawardena)

Protester Mirak Raheem noted the lack of violence and said the work was far from over.

“This is really something amazing, the fact that it happened on the back of largely peaceful protest. But obviously this is just a beginning,” Raheem said, citing work to rebuild the economy and restore public confidence in the political system.

Rajapaksa and his wife slipped away in the night aboard a military plane early Wednesday. On Thursday, he went to Singapore, according to the city-state’s Foreign Ministry. It said he had not requested asylum, and it was unclear if he would stay or move on. He previously has obtained medical services there, including undergoing heart surgery.

Since Sri Lankan presidents are protected from arrest while in power, Rajapaksa likely wanted to leave while he still had constitutional immunity and access to the plane.

As a military strategist whose brutal campaign helped end the country’s 26-year civil war, Rajapaksa and his brother, who was president at the time, were once hailed by the island’s Buddhist Sinhalese majority. Despite accusations of wartime atrocities, including ordering military attacks on ethnic Tamil civilians and abducting journalists, Rajapaksa remained popular among many Sri Lankans. He has continually denied the allegations.