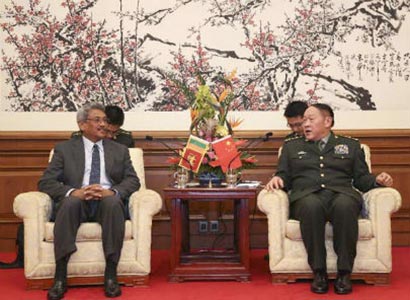 Sri Lankan delegationled by Defence Secretary Gotabhaya Rajapaksa met the Chinese Defence Minister Liang Guanglie on Sunday (11) in Beijing. At this meeting China and Sri Lanka strengthened their defence relations by pledging to boost relations between the two countries and their militaries.

Rajapaksa is in China to attned the 9th China International Aviation and Aerospace Exhibition to be held in the southern city of Zhuhai where China is exhibiting its defence equipment including its new attack helicopter and fighter jets.

Liang who visited Sri Lanka in September this year was the first Chinese Defence Minister to visit Sri Lanka.