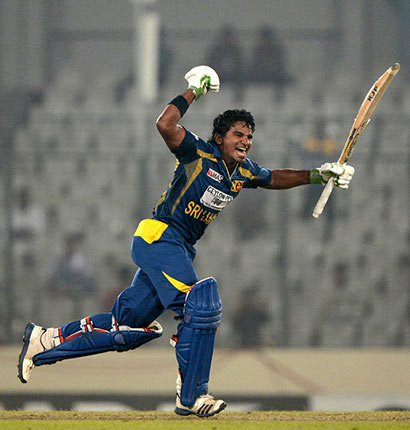 With Sri Lanka missing their three senior batsmen, the dead rubber was supposed to be a big test for the younger set. They came through, with Kusal Perera hitting his maiden international century and Dinesh Chandimal finding form to guide Sri Lanka home and complete the 3-0 whitewash.

There was disbelief at Kusal’s strike-rate when he reached his third ODI fifty at the end of the 25th over. Sri Lanka still needed 138 runs at the halfway mark and Kusal was hitting at 62.50, when his career strike-rate is 86.15. But it didn’t take long for him to pick up the pace. He found two bowlers, Sohag Gazi and Shafiul Islam, to attack whenever the required run-rate needed a lift and raced to his maiden century.

His strike-rate was at a healthy 84.74, having blasted his last 56 runs off 44 balls. His increased scoring rate coincided with Sri Lanka turning the corner in their 241-run chase. The 3-0 win was just reward for their ability to turn corners, even in the direst situations as they showed in the first two ODIs.

Kusal dictated the course of the chase, batting with circumspection when Sri Lanka needed. He saw Lahiru Thirimanne fall in the eleventh over to a soft dismissal, before Kithuruwan Vithanage, promoted to No 3 in place of Kumar Sangakkara, missed a slog-sweep in the 17th over.

Kusal’s partnership for the fourth wicket was worth 138 and effectively decided the fate of the game. Chandimal worked his way through singles and twos to reach his fifty in the 36th over, and soon, Kusal moved from 93 to 99 with a six off Sohag Gazi, and immediately reached three figures with a single.

The change in momentum perhaps came in the 32nd over when the pair took 13 runs off Gazi, and followed it up with 14 off Shafiul. The required run-rate dropped well below five and by the time Rubel Hossain removed both batsmen in consecutive overs, it was far too late.

This has been the theme of the series for the home side, not taking wickets when most required and dropping catches. They dropped one today. With the bat too, there was hardly any extra pressure applied on the Sri Lankan bowlers.

Apart from Mominul Haque and Mahmudullah, the other five Bangladesh batsmen failed to get going after starting off well. Shamsur Rahman gave a simple catch to deep square leg, falling to Dhammika Prasad’s short-ball trap after making 25 off 44.

Mominul Haque was run out after batting impressively to reach 60, his maiden ODI fifty. There was definite two in that tap from Mushfiqur Rahim towards the leg-side field but Kithuruwan Vithanage’s direct hit caught him short after turning slowly for the second run.

Mushfiqur gave an easy catch to point, after which Naeem holed out to mid-off, Mahmudullah to long-on and Nasir Hossain at midwicket (off a full-toss). Sohag Gazi blasted three sixes, which helped the score to move to 240.

Prasad, playing his first ODI in nearly two years, and Suranga Lakmal were the pick of the bowlers, taking three and two wickets respectively. Prasad used his bounce well, accounting for Anamul behind the wicket and later Shamsur and Mushfiqur. Lakmal removed Mahmudullah and Nasir in the 45th over, after two tight spells, ending up conceding just 24 off 10 overs.

Bangladesh had to function without regular runs from both openers in the same match, while Mahmudullah continued his terrible run by getting out for five, after making a duck and one in the last two games. Nasir, Mushfiqur, Shamsur and Mominul also couldn’t kick on, giving the team management a selection headache ahead of the Asia Cup.

Sri Lanka have a few things to worry about, and will be expected to be on top of conditions and pitches here in Bangladesh, having won five matches in a row since February 12.