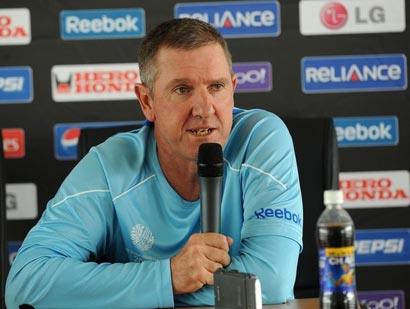 Sri Lanka’s outgoing coach Trevor Bayliss on Thursday said the country needed a strong and stable cricket administration to allow players to focus only on the game and not be distracted by politics.

“On the field, we’ve done pretty well for past 18 months,” Bayliss said in an interview with AFP. “Getting to the World Cup final itself is an achievement, though we lost (to India).”

But off the field, Australian-born Bayliss said, Sri Lanka could improve the way the game was being run in the country. “Good teams like Australia usually have got strong or good management backing the team up. That’s an area we can improve here.”

Sri Lanka Cricket has been run by an interim committee appointed by the sports minister since 2005. The minister picks the selectors, who also keep changing.  “I am constantly amazed how well the players do (on the field), with all the distractions put in front of them. It seems to be the sub-continent way. That’s a skill in itself,” said Bayliss, 48.

Bayliss brought the curtains down on his four-year stint after the World Cup defeat in Mumbai last week. His tenure also saw the team make it to the World Twenty20 final and climb to number three in both one-day and Test rankings.

The World Cup defeat was also followed by resignations from skipper Kumar Sangakkara, his deputy Mahela Jayawardene and a three-member selection committee led by former batting star Aravinda de Silva. Bayliss said the resignations of Sangakkara and Jayawardene were regrettable.

“I think it’s a shame. They are the best two guys to take Sri Lanka forward. They probably had enough of putting up with distractions,” he said.

“These days the role of a captain has to deal with issues that sometimes have got nothing to do with cricket. They have done a great service to Sri Lanka. Guess, they deserve a break.”

Bayliss picked young all-rounder Angelo Mathews as a future skipper. “I think 23-year-old Mathews could be a future captain of Sri Lanka. Maybe a couple of years for him at the international level would do well to get some confidence first, before adding on the responsibility as captain,” he said.”

Bayliss was not sure if he could look back at his stint with total satisfaction as he did not achieve his goal of taking the team to their second World Cup triumph. Sri Lanka won their only World Cup in 1996 under coach Dav Whatmore, a former Australian player. “Have I achieved everything? I don’t know,” said Bayliss.

Cricket is a learning process. In my journey, cricket continues to be a learning experience.” Bayliss joins New South Wales as a coach, a position he held before taking up the job in Sri Lanka. Former Australian batsman Stuart Law, an assistant to Bayliss, has been promoted as the chief coach on an interim basis.