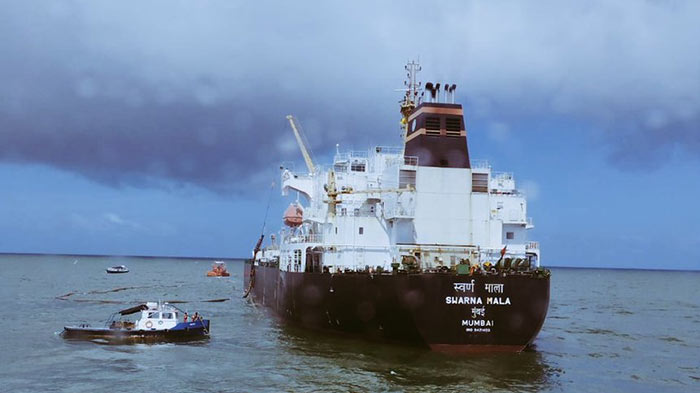 India extended an additional USD 500 million credit line to help Sri Lanka import fuel as the country has been struggling to pay for imports after its foreign exchange reserves plummeted sharply in recent times, causing a devaluation of its currency and spiralling inflation.

India on Saturday provided another 40,000 metric tonnes of diesel to Sri Lanka under the credit line facility to the island nation which is grappling with its worst economic crisis.

Last month, India extended an additional USD 500 million credit line to help Sri Lanka import fuel as the country has been struggling to pay for imports after its foreign exchange reserves plummeted sharply in recent times, causing a devaluation of its currency and spiralling inflation.

Pumping diesel into #SriLanka!!! Another 40,000 MT consignment of diesel under the credit line from #India reached #Colombo today. pic.twitter.com/FNk5fbvSFj

On Friday, the mission here said that an Indian ship laden with urgent relief supplies like rice, medicines and milk powder for the people of crisis-hit Sri Lanka is scheduled to reach Colombo on Sunday.

Tamil Nadu Chief Minister M K Stalin flagged off the ship laden with relief supplies, the first to be dispatched to Sri Lanka, from Chennai on Wednesday. The first consignment comprises 9,000 metric tonnes (MT) of rice, 200 MT milk powder and 24 MT life-saving medicines with a combined value of Rs 45 crore.

People of #India, standing by their bretheren in #SriLanka. Rice, milk powder and medicines worth more than SLR 2billion is scheduled to reach #Colombo on Sunday. The consignment was flagged off from #Chennai by CM of Tamil Nadu @mkstalin on Wednesday.

Chief Minister Stalin flagged off the cargo carrying the relief, from the Chennai Port, in the presence of his cabinet colleagues and senior officials.

The assistance from people of India complements multi-pronged efforts undertaken by the Government of India by standing with their brethren in Sri Lanka, the High Commission said in a press release on Friday.

Several private and social organisations from India have sent assistance to Sri Lanka to meet various urgent requirements. This outpouring of support for Sri Lanka among common Indians is apart from the economic assistance by Government of India which has been to the tune of around USD 3.5 billion since January this year. In addition, medicines, dry rations etc have also been sent by Government of India on a grant basis, the statement said.

“We are pleased to announce that the Government of Japan will grant 1.5 million dollars emergency assistance through WFP to provide three months’ essential food supplies, including fortified rice, dhal and oil, for approximately 15,000 urban and rural people and 380,000 school children across the island,” Charge d’ Affaires ad interim of Japan to Sri Lanka Katsuki Kotaro said.

“We hope that this humanitarian assistance will help improve food access and nutrition for the people of Sri Lanka amidst the economic crisis,” Kotaro added. Using the contribution, the WFP will procure rice for the daily free school meals and also distribute ration packs comprising essential commodities to vulnerable households.

“Getting the right nutrition to those who need it the most will help mitigate the long-term effects of today’s economic downturn,” said Abdur Rahim Siddiqui, WFP Representative and Country Director in Sri Lanka.

Prime Minister Ranil Wickremesinghe announced this week that Sri Lanka would be facing a severe food shortage. He advocated the use of unused state land for cultivation as a mitigation measure. Sri Lanka is going through the worst economic crisis since independence in 1948. A crippling shortage of foreign reserves has led to long queues for fuel, cooking gas and other essentials while power cuts and soaring food prices heaped misery on the people.

The economic crisis has also triggered a political crisis in Sri Lanka and a demand for the resignation of the powerful Rajapaksas.
India has said that as an eternal and reliable friend of Sri Lanka, New Delhi is fully supportive of the island nation’s democracy, stability and economic recovery.

In keeping with India’s Neighbourhood First policy, New Delhi has extended this year alone support worth over USD 3.5 billion to the people of Sri Lanka for helping them overcome their current difficulties, the Ministry of External Affairs said on May 10.