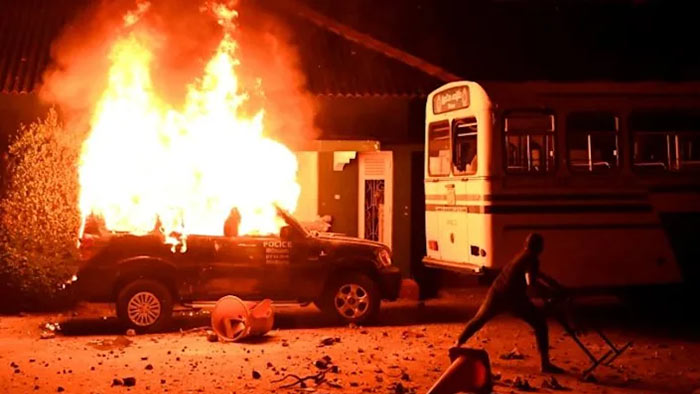 A police car burns on March 31, 2022 during a demonstration outside the Sri Lankan president’s home (AFP / Ishara S. KODIKARA)

Sri Lanka’s president declared a state of emergency Friday giving sweeping powers to security forces a day after hundreds tried to storm his house in anger over an unprecedented economic crisis.

President Gotabaya Rajapaksa invoked the tough laws allowing the military to arrest and detain suspects for long periods without trial as demonstrations calling for his ouster spread across the South Asian nation.

The emergency was declared for “protection of public order and the maintenance of supplies and services essential to the life of the community,” he said in a proclamation.

The nation of 22 million is facing severe shortages of essentials, sharp price rises and crippling power cuts in its most painful downturn since independence from Britain in 1948. 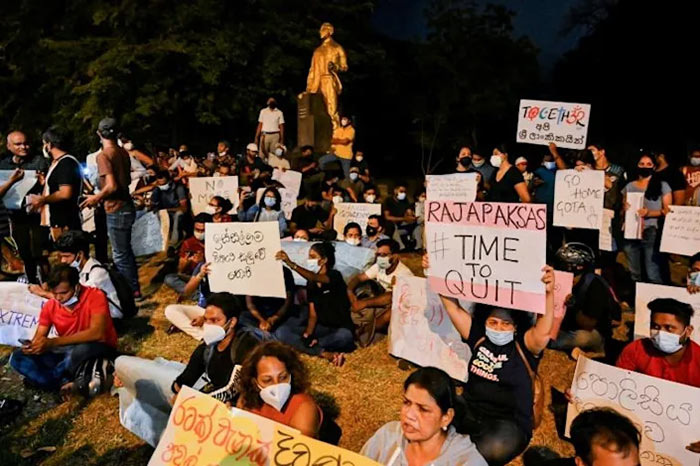 Protestors demonstrate against a surge in prices and shortage of fuel and other essential commodities in Colombo, the capital of Sri Lanka, on April 1, 2022 (AFP / Ishara S. KODIKARA)

Police reimposed a nighttime curfew Friday in the Western Province, which includes the capital Colombo, expanding the no-go zone from the previous night.

Earlier in the evening, dozens of rights activists carried handwritten placards and oil lamps in the capital while demonstrating at a busy intersection.

“Time to quit Rajapaksas,” said one placard. “No more corruption, go home Gota,” said another — referring to the president.

The southern towns of Galle, Matara and Moratuwa also saw anti-government protests, and similar demonstrations were reported in the northern and central regions. All held up traffic on main roads.

Thursday night’s unrest outside the president’s private home saw hundreds of people demand he step down. 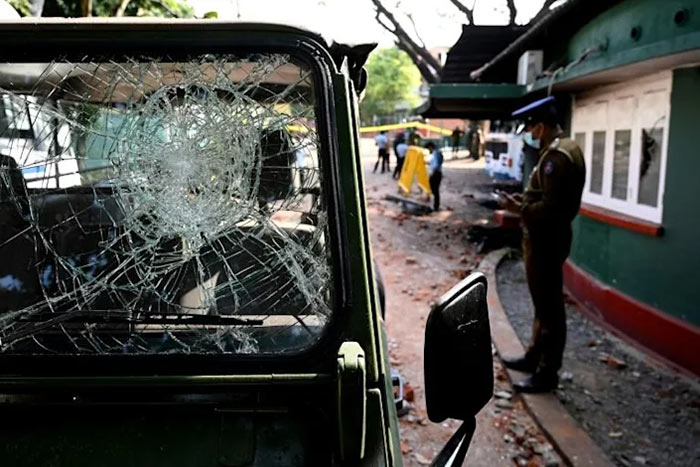 At least two protesters were wounded. Police said 53 protesters were arrested, but local media organisations said five news photographers were also detained and tortured at a local police station, a charge the government said it will investigate.

The police and military presence was beefed up Friday.

Two government ministers said a major intelligence failure had placed the lives of the president and his wife in danger on Thursday.

“Both the president and his wife were at their home when the protests were going on,” Health Minister Keheliya Rambukwella told reporters in Colombo, discounting earlier claims that they were away at the time.

“We had information of a demonstration, but nothing suggesting that it could turn violent. This is a major intelligence failure.”

Transport Minister Dilum Amunugama said “terrorists” were behind the unrest.

Rajapaksa’s office said Friday that the protesters wanted to create an “Arab Spring” — a reference to anti-government protests in response to corruption and economic stagnation that gripped the Middle East more than a decade ago.

One of the president’s brothers, Mahinda, serves as prime minister while the youngest, Basil, is finance minister. His eldest brother and nephew also hold cabinet positions.

Sri Lanka’s predicament has been compounded by the Covid-19 pandemic, which torpedoed tourism and remittances.

Many economists also say the crisis has been exacerbated by government mismanagement and years of accumulated borrowing.

Colombo imposed a broad ban on imports in March 2020 in a bid to save foreign currency needed to repay nearly $7.0 billion this year to service its $51 billion debt.

The state electricity monopoly said it was enforcing a daily 13-hour power cut from Thursday — the longest ever — because it did not have diesel for generators.

The government has said it is seeking a bailout from the International Monetary Fund while asking for more loans from India and China.