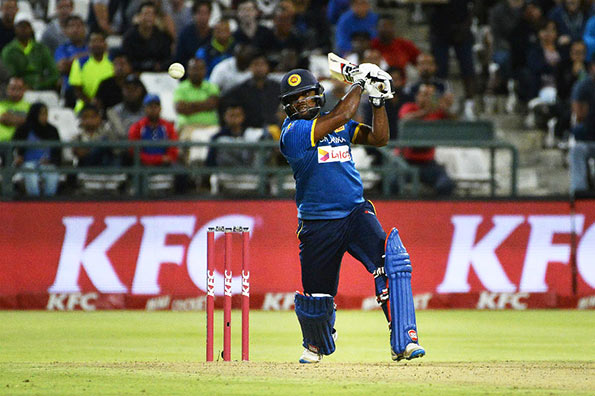 Sri Lanka has claimed its first international cricket trophy on South African soil after beating the Proteas by five wickets in the third T20.

The win at Newlands on Wednesday (NZT Thursday) gave Sri Lanka the series 2-1.

Niroshan Dickwella struck a crucial 68 for the tourists as they chased a challenging 170 for victory after AB de Villiers had struck 63, on his return to international cricket.

Dickwella shared in a 71-run stand with Dhananjaya de Silva (19) before Seekkuge Prasanna’s destructive 37 saw Sri Lanka home with one ball to spare, finishing on 170-5.

The Sri Lankans would have been grateful for some poor fielding from the South Africans, who dropped five catches in total – including three in three balls.

De Villiers had not played an international match since June last year due to an elbow injury, but was soon part of the action after the hosts won the toss and elected to bat.

After Jon-Jon Smuts (19) and Reeza Hendricks (41) put on 36 for the first wicket, De Villiers eased back into the international game with a 35-ball fifty as he put on 71 for the second wicket with Hendricks.

Although South Africa was derailed by the loss of four wickets in four overs, Mangaliso Mosehle’s unbeaten 32 from 15 deliveries gave it a strong total of 169 for five.

Sri Lanka’s reply followed a similar pattern, with Dickwella putting on 36 for the first wicket with Upul Tharanga (20) and then the 71 for the third wicket with De Silva (19).

Imran Tahir pulled the match back in South Africa’s favor when he dismissed both Dickwella and De Silva in the same over and recorded figures of 3-18, but Sri Lanka refused to give up.

Prasanna struck three clean sixes in his 16-ball innings to leave 11 runs required from the final over, before allrounder Asela Gunaratne finished the job with two boundaries off fast bowler Dane Paterson.