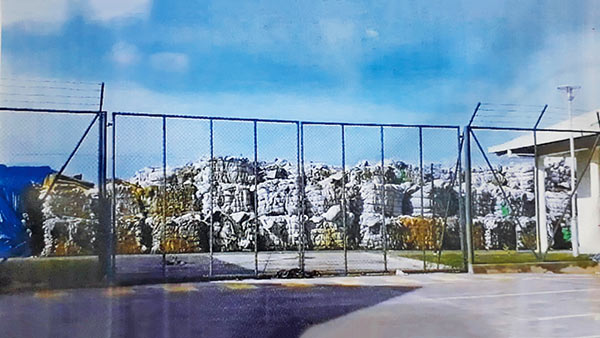 A consignment of 102 container loads of garbage imported from the United Kingdom now lies in the Colombo port while another 122 containers of garbage have already been cleared out of the port to unknown destinations within the country because of a loophole in import regulations created during the previous government, the country’s Customs officers’ union claimed yesterday. That the Government had been alerted to this massive pollution threat was confirmed by the Customs Department official spokesman as well.

The All Ceylon Customs Service Union (ACCSU) claims that the Gazette notification No. 1818-30 of 2013 issued by then Finance and Planning Minister and President Mahinda Rajapaksa under the powers vested in him, has paved the way for large scale import of foreign garbage to the country. Union leaders are calling on Finance Minister Mangala Samaraweera to act swiftly the close the regulatory loophole that enables the import of garbage free of any import inspection and controls.

ACCSU Chief Secretary J.A. Gunathilaka, briefing news media on the matter yesterday, said that with this gazette notification Sri Lanka Customs has no rights to intervene in the process of importing foreign garbage. Accordingly the SL Customs has no rights to inquire into those illegal imports or at least to check those containers. He made these remarks while addressing media about the latest consignment of 102 garbage containers imported from the United Kingdom.

Gunathilaka urged Finance Minister Samaraweera to disallow the uncontrolled import of garbage by cancelling the Gazette notification No. 1818-30 of 2013. This would help protect the Sri Lankan environment for the benefit of future generations. He further requested the Finance Ministry officers to reveal the names of the persons behind the ongoing import of garbage.

“The Customs Ordinance, Import and Export Control Act and, the Exchange Control Act have been exempted by the Gazette notification No. 1818-30 of 2013. In terms of the Gazette, no investigation can be carried out into illegal imports,” he pointed out.

The Customs union leader further said it had been found that garbage importation has been carried out since 2013. The current imported consignment has been described for import purposes as hospital waste, plants and animal body parts, restaurant junk, used mattresses, bed sheets and other items. The 102 garbage containers are now lying in the Colombo International Container Terminal (CICT).

Prior to this consignment, previously around 122 containers, similarly containing such garbage, had already been cleared from the Colombo port. Responding to journalists, he said that the garbage of those containers had been dumped in a hilly area situated in the Katunayake Free Trade Zone. Asked what measures are to be taken to ban these imports and for action against importers, he said that Sri Lanka has already signed the international conventions which banned importing of harmful garbage. According to these conventions, it is prohibited to import any form of junk for any reason.

Union Chairman Anton Priyashantha said that urgent attention should be drawn to this issue since the country could not be allowed to become a ‘Meethotamulla’ for the whole world by being the dumpsite for foreign countries.

None of state bodies that oversee imports can inquire into such harmful garbage imports, he warned. “It is a severe threat to the country if such garbage contained nuclear waste or waste contained deadly germs” he noted.

Customs Department Spokesman Sumith Jayaratna told the Daily News that the import regulatory system had been changed during the previous government to facilitate imports for BOI companies.

He said that the Government had become aware of the possible abuse of the regulations and the issue of garbage imports and that action on the matter would be taken soon.