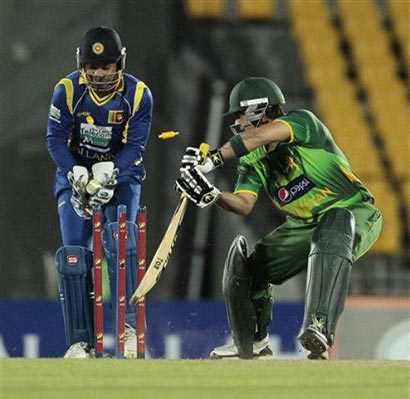 Sri Lanka put on a brilliant bowling and fielding performance to post a comfortable 37-run victory over Pakistan in their opening Twenty20 international on Friday.

Pakistan were bowled out for 95, their lowest T20 total against Sri Lanka, after restricting the hosts to 132-7 in Hambantota.

Opener Ahmed Shehzad top-scored for Pakistan with 36 while the extras contributed 19 runs, the second-highest of the innings. Umar Akmal (12) was the other batsman to reach double-figures.

The Sri Lankan bowlers were backed by their fielders, with Perera and Kulasekera each taking a superb catch.

“The fielding was brilliant and all the bowlers did well. It was a challenging wicket and we did not assess it well when we batted,” said Sri Lanka skipper Mahela Jayawardene.

He jolted the top order when he dismissed Jayawardene, Tillakaratne Dilshan and Kumar Sangakkara in his opening three overs to reduce the hosts to 31-3.

“We had our moments but couldn’t capitalise on them. Tanvir was brilliant and the spinners did the job. I feel we have to work and come hard in the next game.”

Perera smashed two sixes and as many fours in his 16-ball knock to help his team make 43 runs off the last 22 balls.

Lahiru Thirimanne, making his T20 debut, was the other main scorer with a 25-ball 30.

Sri Lanka made a poor start after electing to bat, losing four wickets in the opening eight overs with just 39 on the board.

Tanvir struck with his third delivery when he had Jayawardene caught by Shoaib Malik in the covers and then had Dilshan caught by Umar Gul at fine-leg in his next over.

Sangakkara (19) hit three successive fours off paceman Mohammad Sami before he inside-edged a Tanvir delivery onto his stumps.

The second and final Twenty20 match will be played on Sunday.

4 Responses to Sri Lanka ease to T20 win over Pakistan