Security has become a key issue in the Nov. 16 election after the bombings, which killed more than 260 people.

Sajith Premadasa, the candidate of the governing United National Front, launched his campaign on Thursday, pledging to give priority to national security and “eliminate all forms of terrorism.”

He said he would appoint Sarath Fonseka, who led the army when it defeated ethnic Tamil rebels, ending a 26-year civil war. Fonseka is considered the main architect of the military operation and was awarded the country’s only field marshal rank for his role.

Premadasa’s main rival, Gotabaya Rajapaksa, the brother of former strongman Mahinda Rajapaksa, served as the secretary of the defense ministry during the civil war, which ended in 2009.

Both Gotabaya Rajapaksa and Fonseka are considered war heroes by many ethnic majority Sinhalese.

After the war’s end, Fonseka was sidelined and fell apart with Rajapaksa. Their animosity increased after Fonseka retired from service and unsuccessfully contested Mahinda Rajapaksa in the 2010 presidential election.

Soon after his defeat, Fonseka was arrested and court martialed for alleged corruption in military purchases when he was commander.

Since then, Fonseka has been an archrival of Rajapaksa.

The April 21 suicide attacks by seven Muslim militants boosted Rajapaksa’s fortunes, with many people praising his wartime role and leadership.

Sri Lankan leaders and the security establishment have been under fire for not acting on near-specific intelligence reports of possible attacks ahead of the bombings.

On Wednesday, Rajapaksa launched his election campaign, criticizing the government’s failure to protect the country’s security. He vowed to create a safe country if he takes power.

A record 35 candidates filed nominations on Monday for the election, with Rajapaksa considered the favorite. 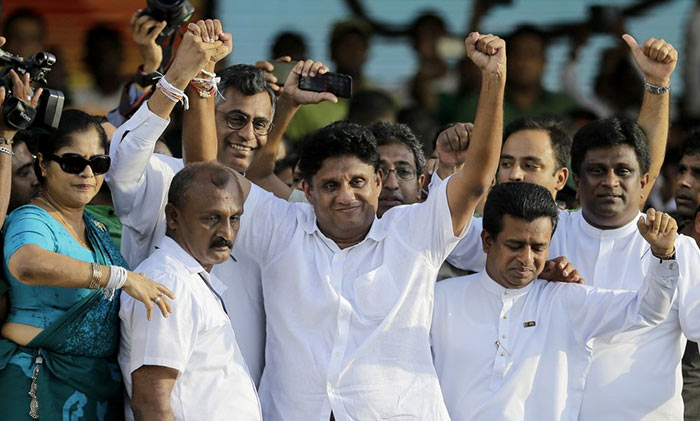