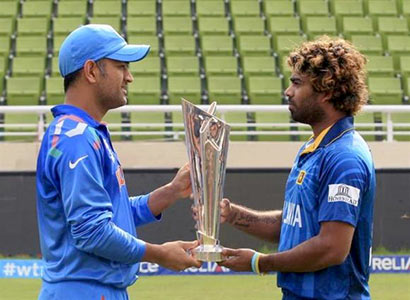 DHAKA – Sri Lanka face a daunting test of nerves from dominant India in Sunday’s all-Asian World Twenty20 final in Dhaka that is rich with incentives for both teams.

If Mahendra Singh Dhoni’s Indians win, they will become the first team to hold all three major limited-overs titles, having won the 50-over World Cup in 2011 and the Champions Trophy last year.

Sri Lanka will seek an end to an inexplicable losing streak in title matches, after being beaten twice in World Cup finals in 2007 and 2011 and the World Twenty20 finals in 2009 and 2012.

A fitting farewell to veterans Kumar Sangakkara and Mahela Jayawardene in their last T20 international game and a million-dollar winning bonus offered by officials back home will further inspire the Sri Lankans.

Sri Lanka’s English coach Paul Farbrace said past results counted for little in T20 games and pointed to his team’s victory in the Asia Cup one-day tournament in Dhaka last month as a turning point.

“We’ve done really well in most competitions and got to finals,” he said. “That’s where teams want to be. We had a big win here in the Asia Cup a few weeks ago where we beat India pretty convincingly, and also beat Pakistan twice.

“T20 is about whoever turns up on that particular day. Form goes out of the window. It’s about making sure we’re ready and focused. What happened two years ago won’t even be talked about.”

Sri Lanka reached Sunday’s final with a 27-run win over defending champions West Indies through the Duckworth-Lewis calculations in a rain-hit semi-final on Thursday.

The West Indies, chasing Sri Lanka’s 160-6, were 80-4 in 13.5 overs when a heavy downpour forced the match to be abandoned at the Sher-e-Bangla stadium in Dhaka.

India have enjoyed an amazing run in the tournament, winning all four Super-10 league matches before beating South Africa by six wickets with five deliveries to spare in Friday’s semi-final.

India have also been served well by opener Rohit Sharma, whose 171 runs are far ahead of the 134 runs compiled by Sri Lanka’s top-scorer Jayawardene.

“There is a good feeling around the team, but we have to make a fresh start in the final,” said Kohli. “Sri Lanka is never a team to take lightly.”

Meanwhile, defending champions Australia will take on England in the women’s final at the Sher-e-Bangla stadium a few hours before the men take the field on Sunday.