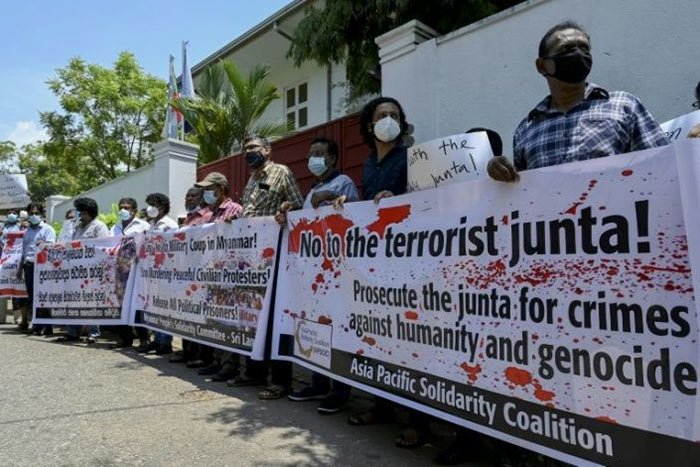 Sri Lanka has invited the new foreign minister of Myanmar’s junta to a regional meeting next month, sparking accusations on social media that Colombo is tacitly endorsing the military coup.

There has been no formal international recognition of the regime which toppled Aung San Suu Kyi on February 1 although Wunna Maung Lwin, the junta’s newly appointed foreign minister, has met virtually and physically with some regional counterparts.

Myanmar’s junta and the envoy sent by its toppled civilian government have also launched contradictory claims over who represents the country at the United Nations.

Sri Lanka’s invitation, seen by AFP, is for an April 1 virtual meeting of the foreign ministers of Bangladesh, Bhutan, India, Nepal, Sri Lanka, Myanmar and Thailand under the Bay of Bengal Initiative for Multi-Sectoral Technical and Economic Cooperation (BIMSTEC).

“The 17th ministerial meeting will greatly benefit from your Excellency’s valued participation, and I look forward to our close engagement over the course of the meeting,” Sri Lankan Foreign Minister Dinesh Gunawardena says in the letter.

“Shame on you!!!,” said Twitter user SweZtun.”You invited a member of the Burmese Military Terrorist group to your BIMSTEC meeting…You are shamelessly legitimising Terrorist group…”

There was no immediate comment from Sri Lanka’s foreign ministry. The two countries have close religious ties, both following the same branch of Buddhism.

Dozens of Sri Lankan activists meanwhile staged a demonstration outside the Myanmar embassy in Colombo Wednesday denouncing the military coup, in a protest planned before the announcement of the invitation.

“No to the terrorist junta!,” said a banner carried by them. “Prosecute the junta for crimes against humanity and genocide.”

Myanmar has been in turmoil since the military ousted the civilian government last month triggering daily protests demanding a return to democracy.

Close to 2,000 people have been arrested and the death toll has climbed to more than 60, as Myanmar security forces attempt to quash the resistance.