Sri Lanka military on alert ahead of vote: police 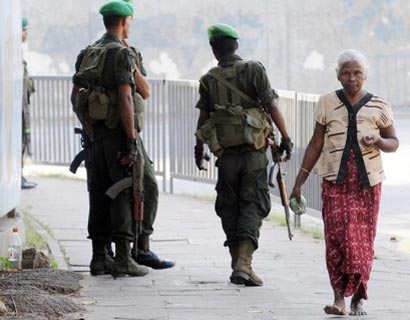 The private Centre for Monitoring Election Violence (CMEV) reported 325 minor incidents of poll-related violence in the run-up to Thursday’s vote, with firearms being used in about 50 cases.

Hundreds of people had been wounded in the clashes between campaigners, but no deaths have been reported.

The military will be on stand-by to assist the 60,000 police already deployed for election-related security duties, spokesman Prashantha Jayakody said.

“We are intensifying security in areas where there had been more violence,” Jayakody said. “The military will not be deployed inside polling booths but they will help us in places where there could be trouble.”

The ruling Freedom Alliance of President Mahinda Rajapakse is widely expected to win Thursday’s assembly elections, the first since his government crushed separatist Tamil Tiger rebels in May last year.

Rajapakse won re-election with a thumping 58 percent at the January 26 presidential vote and he called the parliamentary elections two months ahead of schedule.

Police said they had received 270 polls-related complaints and 200 people had been arrested.

Home » Sri Lanka military on alert ahead of vote: police