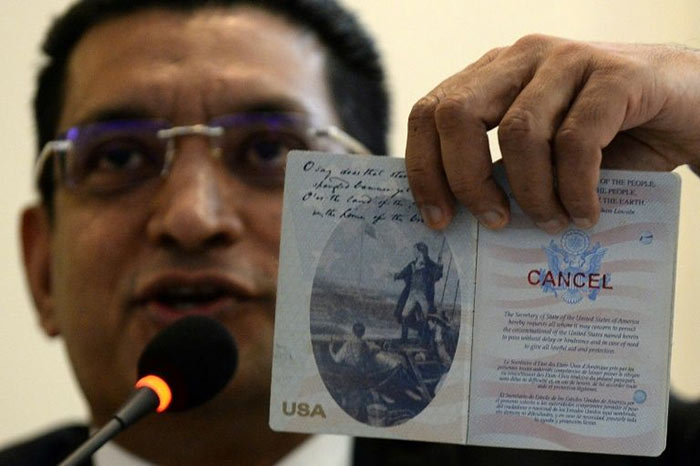 The nationality of Rajapaksa, brother of former strongman president Mahinda, is a key issue ahead of voting Saturday as Sri Lankan law prohibits dual citizens from holding elected office.

Communications Minister Harin Fernando asked in a Facebook post on his official ministry page Sunday whether Rajapaksa should be allowed to stand, suggesting he was still a US national.

“Is Mr. Rajapaksa legally able to contest at a Presidential election in Sri Lanka?” Fernando asked in the now-deleted post.

“If elected, will he able to take oaths and discharge the duties of the office?”

Gotabaya became a US citizen in 2003, giving up his Sri Lanka passport after migrating to Los Angeles following a 20-year military career.

He returned to Colombo in 2005, when he says he reclaimed Sri Lankan citizenship and was appointed defence secretary in his brother’s administration.

Gotabaya insists he renounced US citizenship in May this year.

Fernando said Facebook took down the post from his official ministry page on Sunday, and he repeated the allegations on Twitter while complaining he had been censored.

The same post was still visible on his private Facebook page, however, including a screenshot of what he claimed was Rajapaksa’s US passport.

“American companies shouldn’t interfere on behalf of an American contesting a SL election. I stand by my every word,” he tweeted.

A Facebook spokesperson said they routinely took down any posts containing personal or confidential information.

“We remove this content whenever we become aware of it,” the company told AFP.

“I don’t think most people want to live in a world where you can only post things that tech companies judge to be 100 percent true,” he said.

Rajapaksa’s nationality is also the subject of a police investigation, but the next court hearing will only be held after the election.

If he wins the vote he would be immune from prosecution during his term.

Social media has been abuzz with speculation about Rajapaksa’s citizenship, while a copy of a purportedly cancelled US passport shown by his lawyers has been challenged as fake.

The US embassy in Colombo has declined to comment on the issue.

Rajapaksa and current housing minister Sajith Premadasa, are the leading candidates in a field of 35 contesting Saturday’s election.