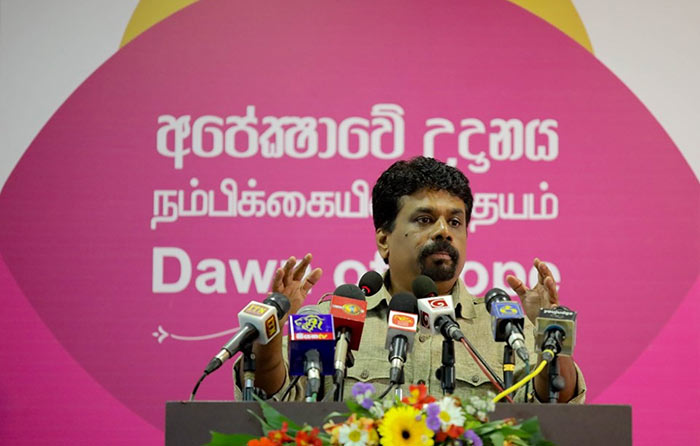 The Presidential election campaign has almost reached its final stage today. You have ample clues to decide on which candidate to support if you look at the behavioural pattern in most election campaign stages. Most of the people seen on SLPP election platforms today are either owners of arrack factories, liquor bars, illicit rock or sand quarries and gem pits who ought to be behind bars today National People’s Power Presidential candidate JVP leader Anura Kumara Dissanayake said.

“Throughout Sri Lanka’s history have you even seen a crowd attending an election rally hooting and jeering at individuals coming on stage to support their cause he asked. Well that was witnessed at SLPP rallies held at Yapahuwa, Galgamuwa and Hettipola recently.

Instead of applauding people coming on stage to support their cause the people attending these SLPP rallies hooted and jeered at some individuals who appeared on stage to address them,” Dissanayake said.

“Similarly we saw an incident where some people jumped over the security fence and assaulted some supporters who attended their propaganda rally instead welcoming them,” he said.

Dissanayake said thereafter Mahinda Rajapaksa offered an assurance on behalf of the movement following him and proposed that hereafter rallies should be held in the morning instead of the afternoon.

Referring to the plethora of pledges held out on stage by certain presidential candidates, Dissanayake said there was a mad spree among certain candidates to outdo others in holding out various pledges.

“They had various television and other media channels supporting them. But these channels do not afford people an opportunity to seek answers to their questions and concerns by bringing these candidates on line for a question and answer session. Most of the candidates were like ‘Muppets’ inflated by their favourite media sections,” he said.

Dissanayake said their National People’s Power election platforms were quite different in that they gave people enough substance and points to ponder when they returned home and make a wise decision. People were not concerned about matters raised on stages that they listened attentively in stoic silence.

Dissanayake said the National People’s Power manifesto was a progressive set of principles aimed at developing and rebuilding the country.

“Our teams is ever ready to go before the people and explain their manifesto in question and answer form. The National People’s power movement had been able to raise the political platform to a mature level from its low ebb,” Dissanayake said.