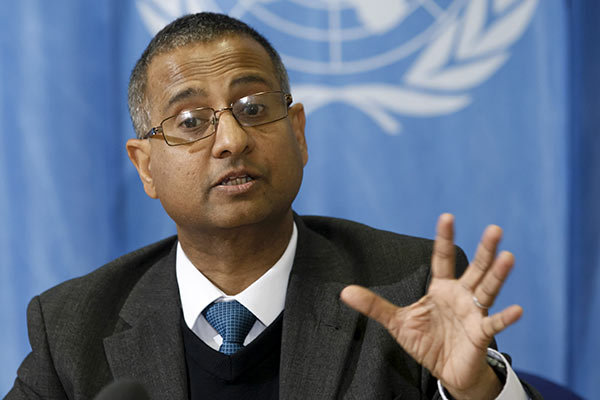 “There is a serious deficit of trust among ethno-religious communities in Sri Lanka following the deadly Easter Sunday bomb blasts and subsequent mob violence this year, and these tensions must not be ignored,” Shaheed said, presenting a report at the end of a 12-day mission to the country.

“While the Government promptly brought the situation more or less under control after the bomb blasts, many religious communities remain very concerned about their security because of incitement to hatred and violence by some religious extremists.

“The Government must take action against the hate propaganda targeting Muslim communities that is being spread through unregulated media and is instigating ethno-religious tension for political gain.

“Failure by the State to take action to address incitement to hatred and violence will allow extremism to escalate and pose serious challenges to peace-building. The ethno-religious tension must not be treated as mere sporadic incidents; the underlying unease and hostility existed long before the Easter attacks and subsequent violence.”

Shaheed said the long-standing traditions of religious harmony and co-existence in Sri Lanka, as well as tolerance and sustainable peace were at risk from religious and political violence, lack of accountability, distrust of institutions and resentment against perceived majoritarian privilege.

“It is time for Sri Lanka to vigorously adopt measures to protect the rights of all people and to hold perpetrators accountable, regardless of their ethno-religious background,” said the expert.

“Women’s experiences of ethno-religious hostility including violence, displacement and stereotyping must also be effectively addressed.

“There is a need for sustainable intercommunal and interreligious dialogue for trust and peacebuilding as well as reconciliation. Space must be provided for moderate voices, for concerns to be flagged and for grievances to be addressed,” the UN expert said.

“I have seen encouraging initiatives by different State institutions, civil society organisations and religious leaders on the issues of reconciliation and promotion of peaceful coexistence.

“However, freedom of religion or belief is not about religious tolerance alone, it is about the right of each individual to be treated equally in their choice to believe or not to believe, and whether to manifest it in private or in public.”

The UN expert said resilience against religious extremism could be built by a range of measures including strengthening the rule of law, addressing root causes, improving education for all and protecting religious diversity.

“I call on the Government and all others to create an enabling environment for the exercise of fundamental freedoms, in the lead-up to elections and not to use ethno-religious tensions for electoral gain,” Shaheed said.

During his mission, Shaheed met Government officials and local authorities. He visited the north, east, central and northwest parts of the country and also held meetings with representatives of ethnic and religious or belief communities, civil society organisations, and the UN.

The Special Rapporteur will present a report containing his conclusions and recommendations to the UN Human Rights Council in March 2020.