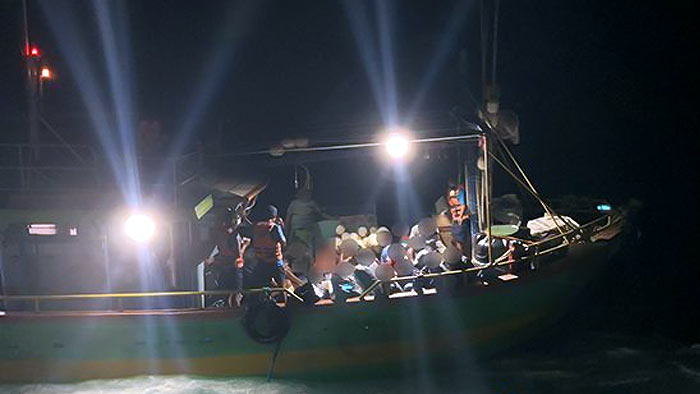 Sri Lanka Navy took hold of 44 people who were suspected to be on illegal migration attempts from the country via sea routes, on the night of 28th August 2022. The apprehensions were made during special search operations conducted by the Navy off Trincomalee and in the beach area of Valaithottam, Batticaloa.

In this operation, P 465 intercepted a suspicious local multi day fishing trawler off Trincomalee and held 29 individuals who were suspected to be on an illegal migration attempt from the country. Among the apprehended persons were 25 males, including 05 in connection to the racket, 02 females over 18 years of age and 02 individuals below 18 years. Thus, the suspects along with the multi day fishing trawler were taken into naval custody.

Further, another search operation mounted by SLNS Walagamba in the Eastern Naval Command at Kuchchaveli beach in the dark hours of 28th August, made way to the apprehension of 02 suspects and a dinghy. The individuals who are residents of Kuchchaveli were suspected to have transferred people from shores to the fishing trawler intercepted by P 465.

In the meantime, a search operation carried out in Valaithottam beach area on the night of 28th August by SLNS Lankapatuna in the Eastern Naval Command led to the apprehension of 10 males over 18 years, remaining suspiciously at the beach. It was suspected that the individuals were wandering there with the intention of migrating from the country by the fishing trawler intercepted by P 4443.

The suspects held in these operations were identified as residents of Trincomalee, Batticaloa, Ampara, Puttalam, Hambantota, Valaichchenai, Kalmunai, Akkaraipattu and Kuchchaveli.

As it is observed that human smugglers organise this nature of rackets using unsafe methods for the purpose of making fast money, the Navy urges the public to refrain from risking their lives by engaging in perilous sea voyages and be victims before the law.