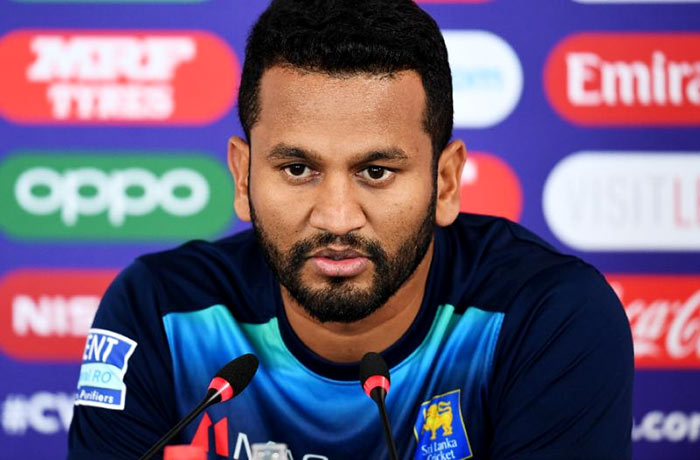 Skipper Dimuth Karunaratne says Sri Lanka will have to think “out of the box” as they try to tame England’s marauding batsmen in their must-win World Cup match against the hosts.

The 1996 champions must win all four of their remaining games to have a realistic chance of making the semi-finals after winning just one of their five matches so far in the round-robin stage, with two washouts.

The problem for Sri Lanka is that they still have to face favourites England and Virat Kohli’s India.

Eoin Morgan’s England are next in line on Friday, fresh from their dismantling of Afghanistan, who were on the receiving end of 25 sixes in England’s total of 397-6 on Tuesday.

Morgan hit a record 17 sixes in his 148 in Manchester, but Karunaratne said Sri Lanka had a plan for each batsman to put the brakes on England at Headingley.

“If we don’t have good pace, we have to think out of the box so I think that is what we need,” Karunaratne said on Thursday, without expanding on the details of his approach.

“We have played in a home series against them, so we have a couple of ideas and we need to work on those things in the middle,” he added.

England have posted more than 300 in four of their five matches, with two scores of 350-plus coming against Asian sides Bangladesh and Afghanistan.

The pre-tournament favourites suffered a shock loss to Pakistan but still managed to post 334 during the game in Nottingham.

Karunaratne believes the English batsmen have played spin better even than their Asian counterparts.

“I think England is the best batting line-up against spinners in the world, so I think if you take the Asian countries, England are playing better than them,” he said.

“That is what we need to think about, check the grounds and what are the combinations we have for the England game. Are we playing two spinners? Or are we going with the extra batsman or fast bowlers?”