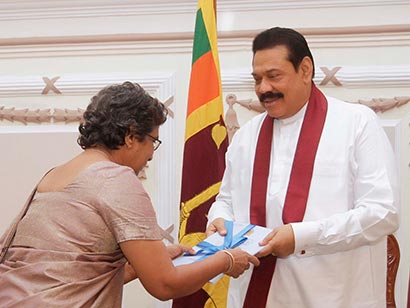 The National Census-2012 conducted this year which is to gather information individually by visiting houses by enumerators was held island wide from February 27 to March 19. It was carried out in three stages. This is the first census held island wide covering all the districts after the lapse of three decades as the Department was not able to conduct the census in the North and East for the last three decades due to terrorist activities.

Earlier estimates placed the mid year population in 2011 at 20,869 million with an annual growth rate of 1.0 percent. However March 2012 Census revealed the actual population is 20,277 million which is lower than earlier estimates and also the population growth has fallen to 0.7 percent in the past 10 years.

Deputy Finance Minister Geethanjana Gunawardena, Finance Secretary Dr. P.B. Jayasundera, Presidential Chief of Staff Gamini Senarath and high level officers of the Department of Census and Statistics were present at the handing over of the initial publication of the Census Report to the President.

Final Report of the 2012 Census of Population and Housing will be released soon.