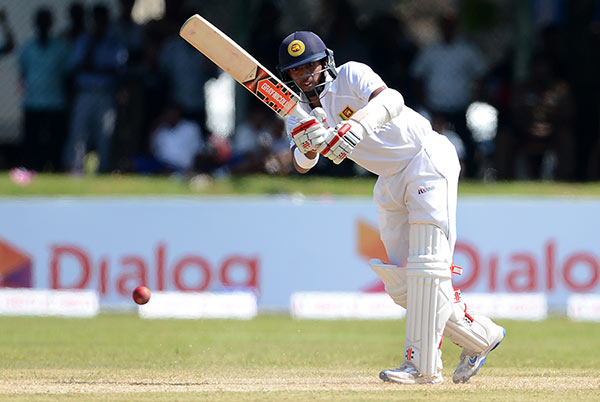 Sri Lanka’s top-order batsman Kusal Mendis made most of the reprieve and went on to post an unbeaten 166 as Sri Lanka finished on 321 for four at stumps on day one of the first Test against Bangladesh in Galle on Tuesday.

It was only the second Test hundred for the 22-year-old Mendis and his knock helped Sri Lanka eye a big first-innings total.

Mendis was involved in a record 196-run stand for the fourth wicket with Asela Gunaratne, playing only his third Test match.

The pair improved on the 150-run previous-record stand against Bangladesh for the fourth wicket between former greats Aravinda de Silva and Kumar Sangakkara in 2002.

Gunaratne fell for the second new ball when he dragged a Taskin Ahmed delivery onto the stumps. His 85 came off 134 deliveries and contained seven fours.

Right-arm fast bowler Subashis Roy struck in his first over coming in as first change when he bowled Upul Tharanga (4). The very next ball, Mendis was given out caught behind but the decision was overturned after television replays showed that the bowler had overstepped. It proved to be a costly mistake.

Mendis hit some elegant drives and was equally efficient with his cut and pull shots. He brought up his half-century with a neat glance for four off Mehedi Hasan. He reached three figures with a straight drive off part-timer Soumya Sarkar for four.

Sri Lanka lost 0both openers in the morning session and then vice-captain Dinesh Chandimal was dismissed after lunch. The hosts had relieved Chandimal of wicketkeeping duties to give him more responsibility in batting in the absence of regular captain Angelo Mathews.

Chandimal was promoted to bat at number four but his uncharacteristic knock that produced just five runs off 54 balls ended when he slashed Mustafizur Rahman straight to gully.

Sri Lanka were struggling at that stage at 92 for three, but the stand between Mendis and Gunaratne brought them right back to the game.

Mendis completed 1,000 Test runs when he reached 149. Sri Lanka were going at less than 2.5 runs an over before Gunaratne came into bat. His arrival saw free flow of runs. The final session produced 166 runs off 35 overs for one wicket at 4.7 runs an over.

Mendis batted for over six overs and faced 242 deliveries for his 166. He hit 18 fours and two sixes.