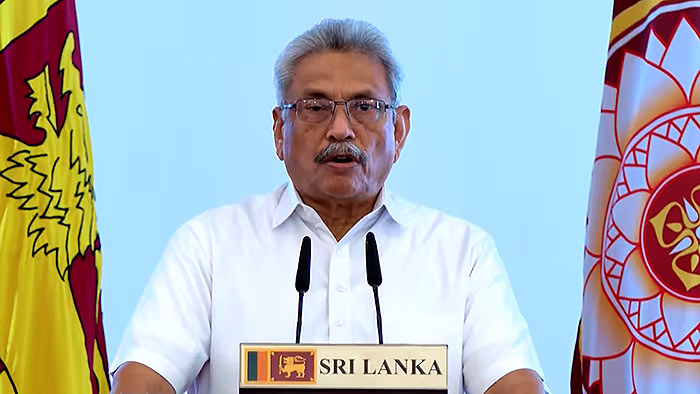 Sri Lankan President Gotabaya Rajapaksa on Thursday called for the international community to help his country overcome a crisis that has pushed it to the brink of economic collapse, with mounting debt, inflation and social unrest roiling the South Asian nation.

“We urgently require the assistance of our friends in the international community to ensure … our immediate needs,” Rajapaksa said in a prerecorded speech delivered on the first day of Nikkei’s Future of Asia conference, held in Tokyo and online.

Rajapaksa said it is “no secret” that the last few months have been “extremely difficult” for Sri Lanka. “We are presently undergoing a severe economic crisis that has profoundly impacted the lives of all Sri Lankans resulting in social unrest,” he continued.

The remarks come as the country grapples with rapidly dwindling foreign currency reserves, inflation and heavy debt, while its key tourism industry has been decimated by the prolonged coronavirus pandemic.

Fitch Ratings last week downgraded Sri Lanka’s foreign currency sovereign rating to “restricted default.” In April, the nation announced a so-called debt standstill “with the intention of restructuring this external public debt through negotiations with our creditors, while simultaneously approaching the International Monetary Fund for a suitable program,” Rajapaksa said.

The president has faced calls to step down as surging food prices stoke anger on the streets, with the country declaring a state of emergency earlier this month. His older brother, Mahinda Rajapaksa, resigned as prime minister in early May.

“We have appointed a new prime minister and a cabinet of ministers with representation from multiple political parties,” Rajapaksa said, referring to Ranil Wickramasinghe from the main opposition party. “And we are fostering ongoing discussions in parliament toward forming a national consensus on the way forward.”

“We are also in urgent need of bridging financing to restore confidence in our external sector and stabilize our economy until the debt restructuring process is completed,” said Rajapaksa.

The president stressed that helping Sri Lanka and other vulnerable countries would benefit the whole international community. “Supporting such vulnerable nations through these difficulties is essential for regional as well as global stability.”

Rajapaksa also highlighted food security as a “widespread problem” facing many parts of the world. “The shortages of food items and sharp increases in food prices likely to occur in the months ahead will place considerable strain on many countries,” he warned.

Prices for agricultural commodities have surged in the wake of Russia’s invasion of Ukraine as those two nations are usually key suppliers of grains such as wheat. That has prompted India, another major wheat producer, to halt exports of the staple grain, including to Sri Lanka.

Rajapaksa also touched on maritime issues, saying his country has “a great interest” in the security of the Indian Ocean region. “Sri Lanka has responsibility over protecting sea routes, maritime resources and combating maritime crime over a significant region of the Indian Ocean,” Rajapaksa said. “And we look forward to partnering with the Asian community as we seek to expand our capacities in this area in future.”