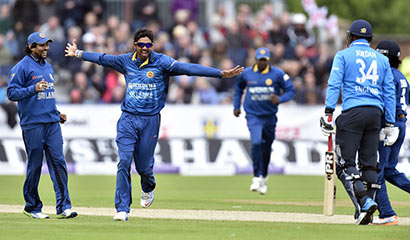 Sri Lanka off-spinner Sachithra Senanayake has been reported for a suspect bowling action following his side’s win over England in the fourth one-day international at Lord’s on Saturday, the International Cricket Council said on Monday.

Senanayake, 29, was reported by the match officials after concerns were raised about a number of his deliveries.

“Senanayake’s bowling action will now be scrutinised further under the ICC process relating to bowlers reported in tests, ODIs and T20Is,” the ICC said in a statement on its website (www.icc-cricket.com.

“The off-spinner is required to undergo testing within 21 days, and, during this period, he is permitted to continue bowling in international cricket until the results of the testing are known.”

Senanayake has played one test, 33 ODIs and 17 Twenty20 matches for Sri Lanka.

The five-match series is tied 2-2 ahead of the fifth and final game at Edgbaston on Tuesday.