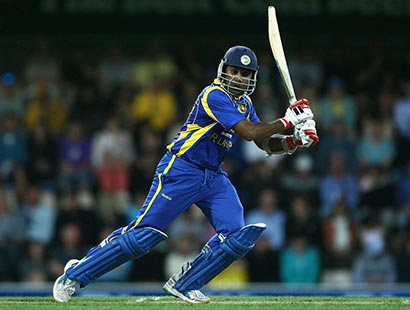 Sri Lanka sure know how to keep things interesting. On a day when Peter Forrest announced himself as Australia’s new No.3 with his maiden one-day century, Mahela Jayawardene and Dinesh Chandimal helped Sri Lanka complete a record ODI chase in Hobart, where Australia’s 6 for 280 wasn’t enough to book them a place in the finals. Sri Lanka jumped to the top of the points table with their three-wicket victory, which came with four balls to spare.

In a tense finish, Sri Lanka appeared to be throwing the match away and after Angelo Mathews holed out for 24 they needed 14 off nine balls with only three wickets in hand. But Thisara Perera took on the responsibility himself and struck a boundary followed by a powerful six over midwicket off Daniel Christian’s next delivery, which left four needed off seven balls. That was no trouble at all, the winning runs coming when Nuwan Kulasekara thumped Brett Lee through cover for four.

It was Sri Lanka’s third consecutive win and they are coming good at the right end of the tournament, after losing their opening two games. They began well with the ball before allowing Australia’s score to balloon to seriously challenging proportions, but Jayawardene’s outstanding 85 at the top of the order gave Sri Lanka the perfect platform.

With six overs remaining, they needed 39 runs with six wickets in hand, and with Chandimal well set on 80, it seemed like only a formality that they would reach the target. But Chandimal was trapped lbw when he tried an ill-judged paddle off Ryan Harris and in the next over, Farveez Maharoof holed out to Ben Hilfenhaus. Lucky for Sri Lanka they had Perera.

The result means Sri Lanka and Australia are now both one match clear of India, and while both sides can still miss out on the finals, they also know that one more win will be enough to guarantee their place. Sri Lanka earned that position by beating the previous best Hobart ODI chase, the 4 for 282 that Australia scored against Zimbabwe in 2001.

Jayawardene gave them their start and was in fine touch after beginning with a couple of edgy boundaries. In the fifth over he put those behind him and took on the pace of Lee, swinging a magnificent six over midwicket from a fast, straight ball that most batsmen would have been content to defend or drive straight. The runs kept flowing for Jayawardene, the dominant partner in a 55-run opening stand.

When Tillakaratne Dilshan pulled a catch to deep midwicket off Hilfehnaus for 3 from nine balls, Jayawardene had already galloped along to 44 from 39 deliveries. The strike evened up during Jayawardene’s partnership with Kumar Sangakkara, who made a run-a-ball 22 before he was caught at point off a leading edge from Christian’s bowling.

Jayawardene had already brought up his fifty with a punchy drive down the ground off Christian from his 45th ball. Jayawardene and Chandimal kept the runs coming during a 63-run partnership that featured some fine strokes, including an excellent cover-drive for four from Jayawardene, who enjoyed using the pace of Lee against him.

But on 85, Jayawardene gave Australia a sniff when he advanced to Xavier Doherty and was beaten by a delivery that turned sharply past his outside edge. Australia needed to follow the stumping with another quick wicket, and instead Chandimal and Lahiru Thirimanne kept their composure and put on 49, including plenty of singles, as the required run-rate hovered below six an over.

The loss of Thirimanne, who paddled Hilfenhaus to short fine leg for 24, could have hurt Sri Lanka, but ultimately their batting was too strong for Australia. Perhaps if Australia had looked for their runs a little faster through the middle of their innings they could have pushed up towards 300, but it is impossible to criticise Forrest and Michael Clarke for an excellent stand that rescued the side from a wobbly start. The loss of both openers had left Australia at 2 for 27 in the seventh over and consolidation was required.

Especially impressive was the way Forrest batted in his first match at No.3, carrying the pressure of replacing a champion in the position. But in Australia’s first match of the post-Ricky Ponting ODI era they might just have found a man who can fill his spot for some time. Forrest’s hundred was his not only his first for Australia but also in any List A match, and no Australian has scored more in his first four ODIs than Forrest’s tally of 238.

He brought up his century by dropping the ball into the off side and haring off for a quick single from his 136th delivery, and it brought fist-pumps from Forrest and a hug from his partner Michael Hussey. He was caught at deep cover off Mathews in the next over for 104 as he tried to keep the tempo rising and it ended a fine innings, and one that has boosted his chances of winning a place on the Test tour of the West Indies.

He struck 10 fours and two sixes but avoided risks wherever he could, generally preferring to force the ball through gaps instead of over fielders. When he did go for the aerial route it nearly brought about his downfall – he was lucky deep midwicket was a couple of paces wide of where one shot landed. A cover-driven boundary off Kulasekara was especially impressive, zipping off the bat with speed and perfect placement.

For much of his innings, Forrest had the support of Clarke during a 154-run stand. The partnership ended when Clarke lifted Mathews to deep midwicket and was well taken by a tumbling Perera. Clarke had played well for his 72 from 79 balls, including two sixes over midwicket, one a fearsome, flat pull early in his innings off Maharoof, who had been impressive early.

Maharoof had claimed David Warner caught behind for 7 after Matthew Wade lobbed a catch to mid-off to give Sri Lanka a strong start. In the end, the Clarke-Forrest partnership and some valuable late runs from David Hussey (40 not out off 28 balls), Michael Hussey (21) and Lee (20 not out) helped Australia to a strong total.

It wasn’t enough for Australia, but it has kept all three sides in the race for the finals. And it has made Sri Lanka clearly the form team in the tournament.