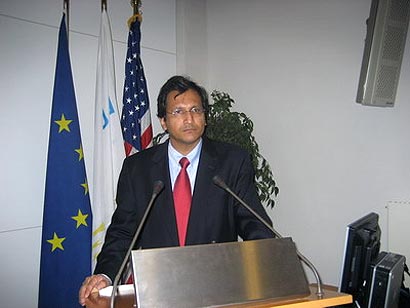 Sri Lanka’s Ambassador to Belgium, Luxembourg and the EU Ravinatha Aryasinha has strongly protested the denial of Sri Lanka’s ‘right of reply’ at an “exchange of views on Sri Lanka” held at the European Parliament last week.

In a letter of protest addressed to Human Rights Sub-Committee Chair, Heidi Hautala who was not present during the discussion, Aryasinha pointed out that in the over one hour long discussion on Sri Lanka on December 6, of the 32 MEPs on the Sub-Committee, only one chose to speak, and other than for a few comments by the European Commission, most of the time was given to a number of Non-Governmental Organizations”.

The Ambassador said despite his being present and demanding Sri Lanka’s ‘right of reply’, its denial by the Presiding officer at the time, “leaves the unmistakable impression that the Human Rights Sub-Committee is not interested in having a reasoned and balanced discussion on Sri Lanka, but is merely content to allow itself (the European Parliament) to be used as a platform for LTTE apologists to discredit the Government of Sri Lanka”.

This week during the plenary sessions of the Parliament held in Strasbourg, Ambassador Aryasinha who addressed the ‘Friends of Sri Lanka’ of the European Parliament – a cross party group which comprises 25 MEPs from over 10 EU member countries, drew attention to this issue.

He urged them to prevail upon European institutions and their respective home governments “to prevent efforts by LTTE apologists to seek to discredit Sri Lanka, which having overcome its 30 year long struggle against LTTE terrorism, is now firmly embarked on a path of reconciliation and development”. He said “it would be a mistake if European Institutions and member states allow rump LTTE cadres and other LTTE apologists to dictate foreign policy towards Sri Lanka”.

He cautioned that “these institutions and states should be mindful that these elements, as in the past, are continuing to be active and are raising funds in these countries using the cover of human rights, and would pose law and order problem to their hosts, as is evident from the continuing number of arrests of LTTE and its front organization activists in many parts of Europe.”

He said the ‘Friends of Sri Lanka’ is advocating that full benefit of the post war development should be enjoyed by the people of Sri Lanka and that to this end the EU should play a prominent role.

The group also took note of the rapid strides taken in Sri Lanka to re-settle and provide livelihoods to most IDPs from the conflict, to re-integrate into society all child combatants and many others who surrendered were arrested, to progressively relax emergency regulations and the on-going work of the Lessons Learnt and Reconciliation Commission (LLRC) which had already made a number of interim recommendations which were being implemented by the Government. They agreed to intensify efforts to protect the good image of Sri Lanka, both within the European Parliament and in EU member state capitals.