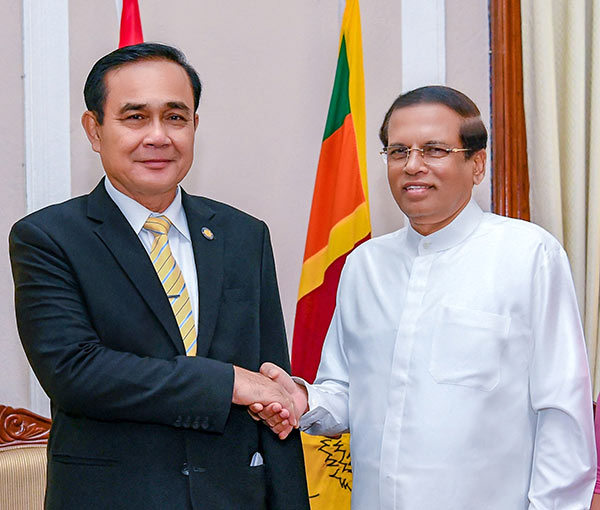 Sri Lanka and Thailand paid their attention to further develop and strengthen the trade and technical cooperation between the two countries.

This was discussed in detail when the official bilateral discussions between President Maithripala Sirisena and the Prime Minister of Thailand General Prayut Chan-o-cha, who is on a two day official visit to Sri Lanka, held at the Presidential Secretariat, yesterday (12).

At the invitation of President Sirisena, the Prime Minister of Thailand is on a. State visit to Sri Lanka.

The Prime Minister of Thailand was warmly received by President Sirisena at the Presidential Secretariat, and accorded an official guard of honour and gun salute.

After a cordial meeting between the leaders, the bilateral discussions were held.

Both leaders commended the relations between the two countries as nations which nourished with Theravada Buddhist philosophy and discussed ways to further strengthen the those ties.

At present, trade relations between Sri Lanka and Thailand have been increased to a considerable level and the Prime Minister of Thailand expressed his pleasure over this and further discussed regarding steps that should be taken to reduce the trade deficit between the two countries.

President Sirisena appreciated the progress made by Thailand in the agricultural and technical sectors and requested to provide assistance to develop these sectors in Sri Lanka too. General Prayut Chan-o-cha acceded to this request and said he will take the necessary actions speedily in the near future.

He also pledged to explore the possibility of providing more opportunities for Sri Lankan tea in Thailand.

During this meeting, attention was drawn to implement a joint tourism promotion programme to take the Buddhist heritage of both the countries to the world.

The Thailand Prime Minister extended an invitation to the President to visit Thailand again to further strengthen the cooperation and friendship between the two countries.

Following the bi-lateral discussions, a number of instruments were signed between the two countries.

The Treaty on the Transfer of Offenders and on Co-operation in the Enforcement of Penal Sentences was signed by Minister of Justice, Thalatha Athukorala and Thailand’s Foreign Minister.

The Memorandum of Understanding on Strategic Economic Partnership was signed by Minister Malik Samarawickrama and Thailand’s Deputy Minister of Trade.

An agreement on Joint Action Programme for Cooperation on Sustainable Community Development Model Based on the Application of Sufficiency Economy Philosophy in Sri Lanka was also signed.

The Memorandum of Understanding on Technological Collaboration Related to Value Addition of Primary Products was signed by Kasetsart University in Thailand and the Ministry of Primary Industries.