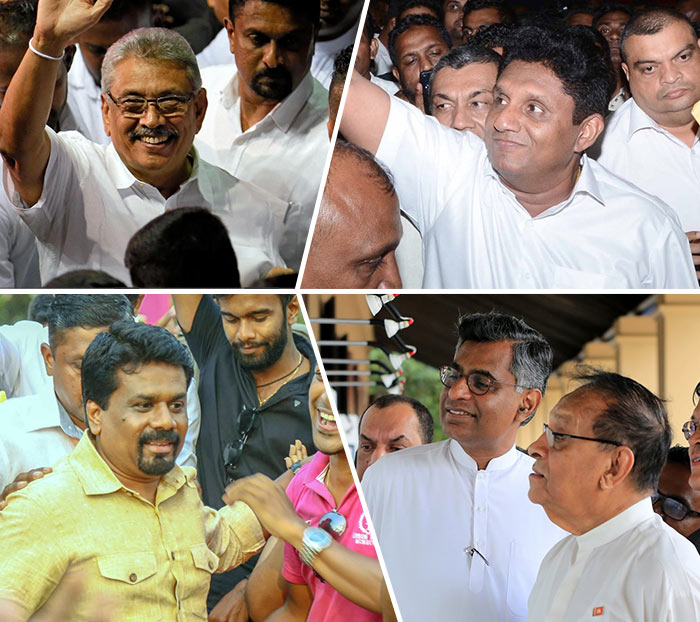 Sri Lanka will hold a presidential election on Nov. 16, the elections office said Wednesday, amid calls for a strong leader to boost national security as the country recovers from deadly Easter Sunday bomb attacks.

President Maithripala Sirisena and Prime Minister Ranil Wickremesinghe, two possible candidates, have been criticized for not heeding near-specific foreign intelligence ahead of the attacks.

Some 15.9 million people are eligible to vote in a country of 21 million people. The Elections Secretariat said nominations will be accepted on Oct. 7. Under the law, the election must be held between Nov. 8 and Dec. 8.

Gotabaya Rajapaksa, the brother of former strongman Mahinda Rajapaksa and a former defense official who played a major role in ending the country’s 26-year civil war, has announced his candidacy, and the election is likely to decide his family’s political future.

Mahinda Rajapaksa, the once invincible strongman who hoped to rule Sri Lanka for life is constitutionally disqualified. But he is aiming for a new bid for power by becoming prime minister under his brother and control the Parliament.

There is no clear rival for Gotabaya with the ruling United National Front facing an internal squabble between its leader Wickremesinghe and the charismatic Housing Minister Sajith Premadasa on who should be the presidential candidate.

Sirisena is eligible for a second term but has not announced his intention.

Anura Dissanayake, a Marxist leader, is being promoted by a group of university teachers and professionals as an alternative, but the main race is expected to be between Gotabaya and the UNF nominee.

Elected president for the first time in 2005, Mahinda Rajapaksa led a successful campaign to defeat the Tamil Tiger separatists, who were then a ruthless terrorist group. Gotabaya as a powerful defense bureaucrat played a key role in the war victory.

But their popularity waned after Rajapaksa was reelected in 2010. He jailed his former army chief who led the troops against the Tamil Tigers after he unsuccessfully contested him for presidency. The Rajapaksa family members took important positions in government and were accused of corruption.

Public protests were fired upon, media gagged and Rajapaksa changed the constitution to scrap a two-term limit.

The opposition used a growing dissent within the government and caused a defection, with Sirisena breaking away from government and successfully contesting Mahinda Rajapaksa in the 2015 election.

On being elected, Sirisena took over the Sri Lanka Freedom Party from Mahinda Rajapaksa and formed a unity government with archrival UNF led by Wickremesinghe. The new political culture brought hope to a nation battered by a divisive politics; for freedom, clean government and a solution to a long-drawn ethnic problem with power sharing with the minority Tamil community.

But the new government quickly became unpopular with divisions between Sirisena and Wickremesinghe and the government not fulfilling promises to punish the Rajapaksa family members and his government for alleged corruption.

The failure to prevent the April 21 attack has many seeing Gotabaya as a strong leader able to protect them despite various allegations against him including condoning rape, torture and shadowy “white van abductions” of critics and disappearances and ordering the killing of hundreds of rebel and Tamil civilians surrendered to the military in the final days of the civil war.

A dual citizen of the United States and Sri Lanka, Gotabaya is facing two lawsuits in U.S, one in the killing a prominent newspaper editor and another involving the torture of a youth under his watch. He has denied the allegations and has said he has started the process to renounce his U.S. citizenship because Sri Lankan law does not permit dual citizens to hold office.

The Easter attacks jolted a nation that had experienced relative peace for a decade after nearly three decades of bloodshed. They say divisions between Sirisena and Wickremesinghe led to communication gaps and intelligence failure.

Their dispute came into open since last year, when Sirisena sacked Wickremesinghe and appointed Rajapaksa as the prime minister. However, a Supreme Court decision later reinstated Wickremesinghe.