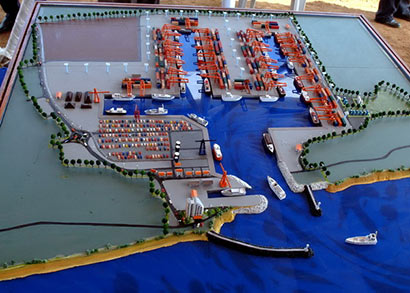 Sri Lanka will take part in a joint venture with China Merchants Port Holdings Company Limited to develop a port in its south, where China has also been offered an investment zone.

The cabinet approved a plan under which Sri Lanka will lease 80 percent of the Hambantota port to Hong Kong-based China Merchants Port Holdings Company for 99 years for $1.12 billion, a government document showed on Wednesday.

China Merchants Port Holdings Company will make a $5 million payment as a security deposit upon signing the agreement, which the government expects to do on Jan. 7.

The company will pay 10 percent of the $1.12 billion within one month, and the remaining 90 percent within six months of signing the transaction documents.

Prime Minister Ranil Wickremesinghe had offered during a visit to China in April to swap equity in Sri Lankan infrastructure projects against some of the $8 billion in debt the Indian Ocean island owes to China.

The port was built with the help of Chinese loans and contractors in 2010 under former, China-friendly president Mahinda Rajapaksa, as part of efforts to develop the country’s infrastructure after ending a 26-year war in 2009.

But the port and a nearby airport, also built with Chinese finance, are seen as white elephants because they are not proving financially viable, the government has said.

China’s interest in the port may reflect its ambition to build a “Maritime Silk Route” to the oil-rich Middle East and onwards to Europe.

That makes some countries, including India and the United States, nervous, with Sri Lanka sitting near shipping lanes through which much of the world’s trade passes en route to China and Japan.