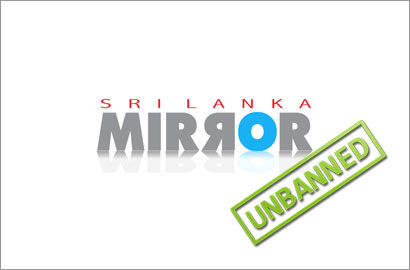 COLOMBO, Sri Lanka (AP) — Sri Lankan authorities agreed Thursday to restore access to a news website that had been blocked with four others for more than a month over alleged insults and character assassination.

The Telecommunication Regulatory Commission agreed to unblock srilankamirror.com on several conditions, including that it will not provide links to sites that are blocked or unregistered, said Saliya Pieris, counsel for the website. The site was partially available Thursday afternoon as some service providers had not yet lifted the block.

Rights groups had criticized the order blocking the sites as undemocratic. Sri Lankan laws do not restrict the press from criticizing leaders, but media can be charged for defamation.

In blocking the sites, the media ministry said they committed character assassination and insulted people including key political leaders. It also required news websites to register, bringing them in line with older media formats such as newspapers, radio and television.

As per the agreement reached in Supreme Court on Thursday, srilankamirror.com has delinked to the four blocked websites and it will delinked to the unregistered once as soon as it receives a list of them, the site’s editor, Keluma Shivantha, said. He had filed a fundamental rights application in the Supreme Court against the blocking.

Last week, Free Media Movement — a local media rights group — also filed a fundamental rights application in the Supreme Court on the basis that the blockade breaches the people’s right to information and freedom of expression. The case is scheduled to be heard next month.

Of the five sites, lankaenews is highly critical of the government and has been blocked previously. A number of threats and attacks have been made against it in recent years.

A columnist for the website has been missing for more than a year. The website’s office was set on fire earlier this year and lankaenews blamed the government for the attack.

The U.S. Embassy in Colombo said last month it was deeply concerned. The statement called on Sri Lankan authorities and telecommunications firms “to stop activities aimed at blocking free access in Sri Lanka to all legitimate media websites, including Lanka-e-News.”