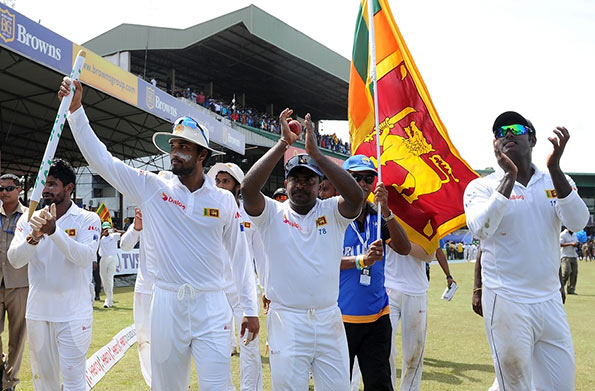 Sri Lanka have won a Test series 3-0 against Australia for the first time after beating the tourists by 163 runs in the third Test in Colombo with the spinner Rangana Herath -taking seven wickets in a 13-wicket match haul.

Set 324 to win, Australia reached 77 without loss in their second innings but the dismissal of the opener Shaun Marsh on the stroke of lunch triggered a collapse to 160 all out in the middle session.

Herath accounted for Steve Smith (8), Adam Voges (1), Mitchell Marsh (9), Peter Nevill (2), Mitchell Starc (23), Josh Hazlewood (0) and Nathan Lyon (12) to finish with seven for 64 in the second innings. It was his seventh 10-wicket haul in a Test. Herath was named man of the match and man of the series for his tally of 28 wickets.

The opener David Warner shrugged off a poor series to score 68.

Sri Lanka had beaten Australia in a Test series only once before, in 1999 under Sanath Jayasuriya’s captaincy.

They declared their second innings at 347 for 8, setting Australia a daunting target on a final-day pitch. Dhananjaya de Silva followed up his first innings maiden century with an unbeaten 65. He faced 74 balls and hit 10 boundaries to increase the scoring rate. Kaushal Silva anchored the innings with 115 having scored only 18 runs in his previous five Test innings. Dinesh Chandimal supported the innings with 43. The Australia off-spinner Nathan Lyon took four for 123 in 37 overs.

Sri Lanka scored 355 in their first innings and Australia made 379.

Given the gulf in facilities, player development, professional opportunities, and pay packets, victory over Australia was an extraordinary achievement.

India are now the top-ranked Test team but second-ranked Pakistan will go top if India fail to win the fourth Test match against West Indies, starting Thursday in Trinidad.

Sri Lanka have moved up one spot to No6.

(The Guardian / Pix by AFP)