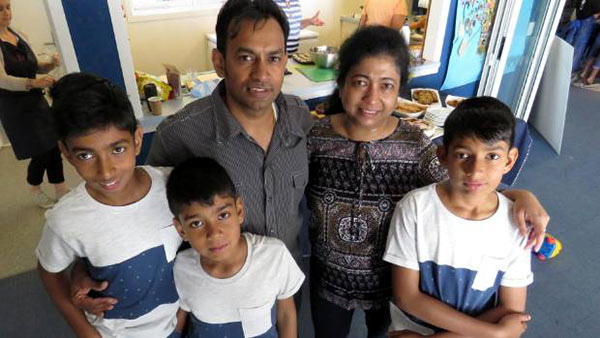 A year after they pleaded to avoid deportation to Sri Lanka, a Queenstown family have been granted residency and are giving back to the community that supported them.

“I am so happy,” an emotional Dinesha Wijerathne said, while working in her new chef job at the community project Let’s Eat.

“I just want to thank everybody.”

Husband Sam Wijerathne, a taxi driver, said they had struggled for eight years to reach a point of certainty for the family.

“We came here for a better life for my kids. It has been a hard life but now the boys are doing their job – their school work and all their teachers are happy with them.”

The couple and their three cricket-mad, primary school-aged boys had lived, worked and studied in New Zealand for eight years when their world fell apart last year.

As they went through the residency application process, Dinesha Wijerathne, the primary visa holder, was diagnosed with multiple sclerosis (MS) and was unable to work.

Their working visa applications were declined and the future looked grim.

However, their story touched the hearts of many people.

Queenstown Primary School was amongst the first to rally behind them. Tam Schurmann and the charity Baskets of Blessings realised the family’s situation and became involved.

“Really I must thank him for allowing thIs family to stay in New Zealand,” Walker said.

From the beginning Walker promised the family he would do everything he could to keep them in New Zealand, but knew the odds were against them.

“We didn’t have long at the time. They were weeks away from being deported.”

The incredible public support was a key factor, Walker believes.

About 450 people marched through Queenstown in a display of community unity, and hundreds of others provided food, petrol vouchers and support.

Schurmann first met the family when Dinesha Wijerathne was nominated for a gift basket through the Queenstown charity Baskets of Blessing.

“When that was delivered we realised there was a far greater need. We put the word out to the greater community – that they were unable to work and couldn’t put food on the table.

“We were overwhelmed with unconditional love, from single mums dropping off half of their weekly groceries to residents from all walks of life.”

The community fed the family for about eight months, she said.​

“Not only has it now come full circle but Dinesha is now supporting a project that’s providing for many more.”

When Dinesha Wijerathne was given permission to work, MS was making it difficult for her to work fulltime as a chef in a traditional kitchen.

However, she was “snapped up” by the Presbyterian Churches of the Wakatipu as the catering manager for their already successful free Pasta Cafe and similar initiatives, Schurmann said.

The role has broadened with the introduction of the Let’s Eat programme, another charity initiated by Schurmann, cooking up 400 frozen meals each week for distribution in the community, using food surpluses provided by supermarkets.

“Dinesha oversees menu design, stock take, takes care of food safety…the most difficult thing is seeing what food she has to work with in the morning and coming up with simple recipes for the volunteers to make.”

The family still has a difficult road ahead. Dinesha Wijerathne’s health is challenging, they have a $30,000 bill to pay to immigration lawyers and they are living in a one-bedroom room in the former Queenstown Holiday Park, but Walker believes they deserve to stay.

“They have been tax payers in New Zealand for several years and I have no doubt the three boys will go on to became great New Zealanders in whatever field they choose.”

At least one, 12-year-old Subath, already knows where that will be. Expect to see him in future as a Black Cap.