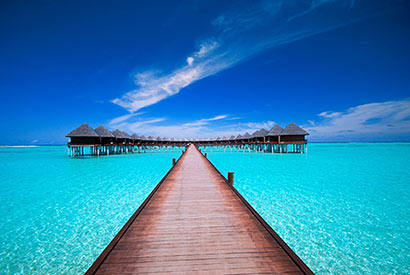 A dead body washed up at an exclusive island resort in the Maldives yesterday where English football star David Beckham is taking a hideaway Christmas holiday with his family, police said Monday.

Investigations were underway to establish the cause of death of the man, whose body was found floating near a jetty on Sunday at the One and Only Reethi Rah resort near the capital island Male, police said.

“The body was removed to a morgue and investigations are underway,” police spokesman Hassan Haneef told AFP by telephone.

In a second incident, a stock of fireworks brought in for New Year’s Eve exploded on the island Sunday, shattering the calm for guests who pay up to $12,700 a night for a room.

Police said the dead man, identified as a Sri Lankan national, was not a guest or an employee of the upmarket resort where Chelsea football club owner Roman Abramovich was also reportedly staying.

Beckham, his wife Victoria and their four children remained at the de luxe resort despite the problems on Sunday, tourism sources said.

The couple visited the Maldives a year ago and stayed at the same resort, but that holiday was dampened by incessant rain.

Tourism Minister Ahmed Adeeb told reporters last week that several international celebrities were spending their Christmas holidays in the nation of more than 1,000 coral-fringed islands scattered across the equator.