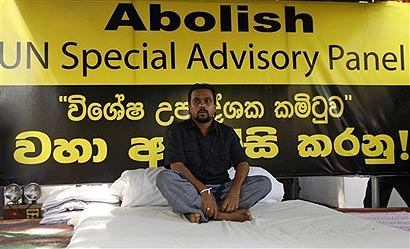 COLOMBO, Sri Lanka — A Sri Lankan cabinet minister started a hunger strike Thursday in front of the U.N. office after the world body refused to halt its investigation into alleged human rights abuses during the country’s civil war.

Buddhist monks chanted blessings and some 100 national flag-waving supporters cheered as Housing Minister Wimal Weerawansa got on a stage and proclaimed he decided to fast to stop what opponents believe would be an unfair prosecution of Sri Lankan armed forces and political leaders for war crimes.

According to the U.N. more than 7,000 ethnic Tamil civilians were killed in the last five months of the fighting, and Secretary-General Ban Ki-moon appointed a three-member panel last month to advise him on accountability for the alleged atrocities.

“I will fast until the U.N. panel is dissolved and Ban Ki-moon gives an assurance that he will not label the soldiers and political leaders who brought peace to Sri Lanka as war criminals,” Weerawansa told the gathering.

He said the panel was set up with the motive of “hunting down” the soldiers.

“I am prepared to die fasting. If I die during this fast, I request the patriotic fellow citizens to carry forward this struggle to safeguard the soldiers who protected the country.”

He led hundreds of protesters Tuesday and trapped U.N employees inside their office but all of them were freed after the country’s foreign secretary intervened. A smaller sit-in Wednesday had ended by Thursday, and U.N. employees were working in the building or from home.

The U.N. has refused to accede to Weerawansa’s demand.

“The panel has been created and they will go about their work, so that’s clear,” associate spokesman Farhan Haq said at U.N. headquarters in New York on Wednesday.