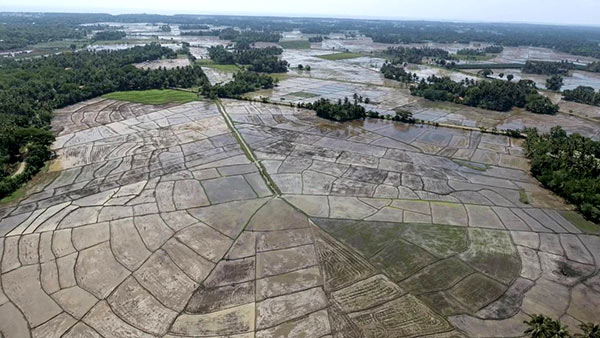 BERAGAMA, Sri Lanka: These days, Vimalabudhi Thero, head monk at the Beragama village Buddhist temple, is consumed more by worldly concerns than matters of the soul.

With news that Chinese investors are eyeing the fertile plains he calls home, villagers worry this could end generations of family farming in their verdant corner of southern Sri Lanka.

“My biggest fear is that I will be left with a temple and a bunch of Chinese donating alms to me,” the monk said from the veranda of his living quarters, surveying the vast paddy fields stretching before him. His whitewashed temple is now a protest command centre, used by villagers to mobilise against change.

They fear that local farmland will be swallowed by a proposed 15,000-acre investment zone set up by the government to attract Chinese investment. And that fear means Beragama is now in the throes of heated public protests.

Less than half an hour’s drive from the nation’s second biggest airport and port, its access to this key infrastructure and stable water supply has made the area a magnet for outside development.

Prime Minister Ranil Wickremasinghe and the Chinese envoy to Sri Lanka Yi Xianliang, announced on January 7 that work would begin to create the zone, which Chinese officials predict could bring as much as LKR750 billion ($5 billion)in investment funds to the region.

The money, however, does not impress Vimalabudhi Thero.

“It is not that we are against investments, we want investments in this region, but we don’t want to lose our ancestral lands.”

Beragama – which lies about 250 km from the capital Colombo – was itself born out of another government development plan, one launched nearly 80 years ago, when people were moved in to settle an area that was little more than jungle.

At the tail end of British rule, the then-government began shifting people into fertile areas to establish agriculture. The settlements attracted even more people after Sri Lanka’s declaration of independence in 1948, village elders said.

Since then, families have lived and worked productively in the area, growing mostly rice in vast paddies.

“These are our ancestral lands, they are fertile. In the dry zone, this land with water supply is vital, that is why these lands have been eyed,” said Dushan Pathirana, a third generation resident. “We don’t want go and live 70 km from here. Our lives are here, we can not be uprooted like that.”

Government officials in the district told the Thomson Reuters Foundation that no decision had yet been made on which land might to be acquired or which people moved.

S H Karunarathne, the District Secretary for the local Hambantota region said land mapping was the only work underway. “We have been directed to survey the land area, that is it. We have no instructions on acquisitions.”

The villagers, however, are not taking any risks and have mobilised to stop the map makers.

“The surveyors come without any announcement, like a flying squad – that doubles the fear,” Vimalabudhi Thero said.

The monk said he had attended a meeting with the Prime Minister, Ranil Wickremasing, and had been promised that any villager who lost land would be properly compensated.

According to government officials, new investment is urgently needed to ease the nation’s debt repayments.

Sri Lanka’s foreign debt is estimated by its Central Bank to be about $64 billion, with around $8 billion owed to China.

DISQUIET AT THE TOP

There is also opposition to the project from the country’s own politicians, even those who back foreign investment.

This included construction of the new port and airport in Hambantota, which according to the current government is underperforming.

During a meeting on January 10, just three days after the investment zone was announced, Rajapaksa told the Chinese ambassador that he believes agricultural land should not be handed out on long, 99-year leases.

Rajapaksa told the Chinese diplomat that the government should first use the 4,800 acres available for investment near the port, before looking for land elsewhere.

“The disruption caused to the people of the area will be immense if 15,000 acres of land were to be acquired for this purpose. The government should fill the free port with investments first before opening more zones,” he said in a statement.

He also revealed in a twitter Q&A that the Chinese themselves are concerned about how the project will be implemented – but did not elaborate further.

For now, uncertainty reigns. Villagers in Beragama know the investment zone is likely to go ahead but nobody knows just which land will be targeted.

Last week, the only sign of activity was a foundation stone unveiled by the prime minister and the Chinese envoy.

“Now we wait for the government to tell us what is being taken,” said Pathirana, standing in the shadow of the pagoda. “When the next step comes …they will only take our land over our dead bodies.” ($1 = 150.1000 Sri Lankan rupees)