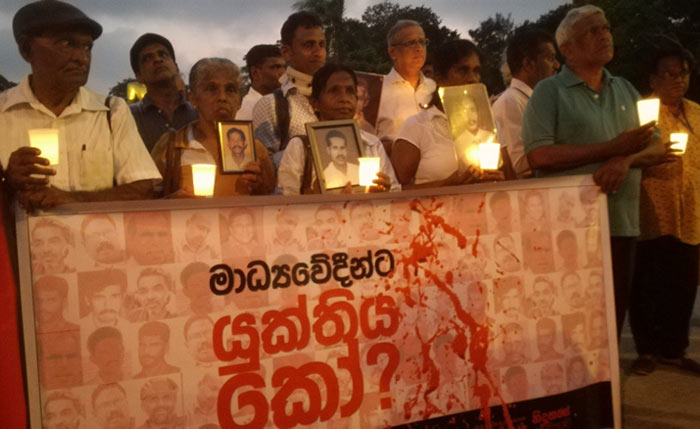 Sri Lankan rights activists, lawmakers and relatives of slain and disappeared journalists held a vigil over their abductions, killings and disappearances on Thursday, demanding the government expedite investigations on attacks on the media under the previous government.

Freddie Gamage, an organizer of the vigil, said despite being in power for four years, the current government “has miserably failed to fulfil its promise to punish those responsible for attacks on journalists.”

President Maithripala Sirisena and his government came into power in 2015, promising to end a culture of impunity and ensure justice to the slain journalists.

Sirisena defeated president Mahinda Rajapaksa under whose tenure dozens of journalists were killed, abducted and tortured. Some fled the country, fearing for their lives.
In some cases, military officers were arrested and later released on bail.

Gamage said 44 journalists and media workers were killed between 2006 and 2015, during the Rajapaksa regime.

“Investigations have been launched only into two or three cases, but so far those probes too have not been concluded and culprits have not been punished. All the other cases of attacks on journalists have been totally neglected by the authorities. We urge the government to expedite the probes and punish the culprits,” he said.

Ajith Perera, a lawmaker and government minister lamented about the slow-progress of the investigations on attacks on journalists.

Separately on Thursday, Sandya Ekneligoda, the wife of abducted journalist Prageeth Ekneligoda, staged a sit-in protest in front of the president’s office, demanding the government to bring the perpetrators responsible for her husband’s abduction nine years ago on Jan. 24, before the law.

Ekneligoda, a journalist and cartoonist, wrote about corruption and nepotism and Rajapaksa’s leadership of the military campaign against the Tamil Tiger rebels. He was abducted two days before a 2010 presidential election in which he actively supported the Rajapaksa’s rival. Several military intelligence officials have been arrested in connection with his disappearance. But they have been bailed out.

Most of the killings and attacks on journalists took place during Sri Lanka’s civil war which ended in 2009, after the government troops defeated the Tamil Tiger rebels who fought for a separate state for the ethnic minority Tamils.

Both the government and Tamil rebels were accused of killing and abducting critics.