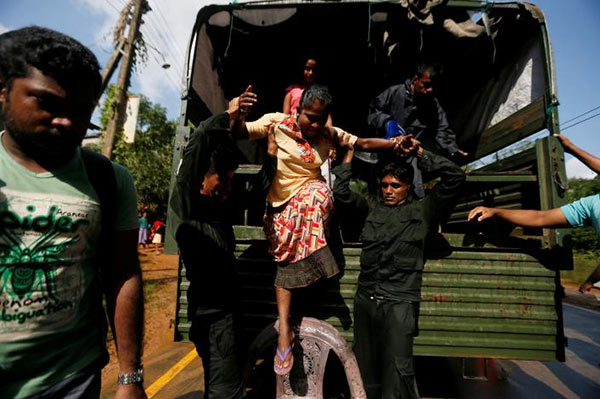 Thousands of survivors of devastating floods and landslides in Sri Lanka are at risk of potentially fatal diseases such as dengue fever, charities warned on Monday as the death toll from the disaster continued to rise.

Torrential rains over the last four days have sparked widespread flooding and triggered landslides in southwestern parts of the Indian Ocean island. At least 177 people have died and almost half a million others have had their lives disrupted.

As search and rescue teams look for more than 100 people who remain missing, and Sri Lanka’s military in boats and helicopters struggle to reach marooned villagers with food and clean water, charities are warning of a looming health threat.

“The threat of water-borne diseases is a big concern with over 100,000 people displaced from their homes, many of whom are staying in damp, crowded conditions,” Chris McIvor, head of Save the Children Sri Lanka, told the Thomson Reuters Foundation.

“I’m particularly worried we could start seeing even more dengue cases because of the floods, as stagnant water provides the perfect breeding ground for mosquitoes. It’s the last thing needed by communities that have already lost so much.”

Outbreaks of diseases such as dengue fever and cholera, and illnesses like diarrhea and dysentery, are often a threat in the aftermath of floods due to water-logging, say experts.

Dengue is common in South Asia, especially during the monsoon season which runs from June to September, and if untreated, it can kill.

Sri Lanka’s ministry of disaster management says almost 558,000 people from 15 of the country’s 25 districts have been hit by the disaster. Villages and towns have been inundated, thousands of homes damaged and agriculture land swamped.

Around 75,000 people in the worst-affected districts have been relocated to temporary shelters.

The Sri Lanka authorities have called for international assistance to help with search and rescue efforts, and have also appealed for aid ranging from boats, generators and mobile toilets to mosquito nets, clothes and clean drinking water.

But aid workers say reaching survivors remains a challenge. Entire communities remain marooned, living out in the open as their homes have been destroyed, with roads submerged under water or blocked by landslides.

“Getting in to these communities is of the highest priority right now so we can find out exactly what the needs are and respond,” said McIvor.

“At the same time more rains are predicted since we are only at the start of the south west monsoon season, so the situation could worsen even more over the coming days and weeks.”