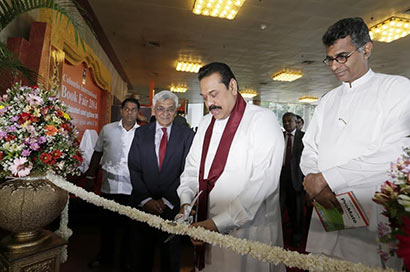 President Mahinda Rajapaksa declared open the Colombo International Book Exhibition-2014, Sri Lanka’s largest book fair yesterday morning at the Sirimavo Bandaranaike Exhibition Centre at BMICH premises amidst a large number of book publishers in the country and overseas. This book fair will continue until September 16th from 9.00am to 9.00pm. The Sri Lanka Book Publishers Association (SLBPA) is organizing this Exhibition for the 16th occasion.

President Rajapaksa who arrived for the opening of the Exhibition was warmly welcomed by the organisers including SLBPA Chairman Vijitha Yapa and General Secretary of the Association Upali Wanigasuriya. Technology and Research Minister Champika Ranawaka, Chief of Presidential Staff Gamini Senerath, Deputy Head of Mission of the Chinese embassy in Colombo Ren Faqiang, Kumari Gunaratne of Ratna Book publishers were among those who joined in the opening ceremony.

This massive annual book exhibition is an ideal chance for school children, university students and schools to buy books, magazines and stationery at special discounts. Discounts ranging from 5% to 70% are given at the event. It has 375 stalls put up by local and foreign book publishers and is expected to attract more than one million book fans. Stalls have been put up by book publishers from many countries including India, China and the United States. Noteworthy are the stalls maintained by China in a separate hall and 122 Chinese representatives have taken part in the exhibition which is one of the largest book exhibitions in the South Asian region.

The SLBPA annually awards financial assistance for less privileged school children and the university students under the “Daru Diriya Scholarship Programme” launched with funds received from the sale of tickets at the Book Exhibition. This year seven students received scholarships from President Rajapaksa at the inauguration ceremony. However an opportunity has been accorded to school children and war heroes to enter the Exhibition free of charge.

President Rajapaksa visited the stalls, joined in viewing the Exhibition and exchanged views with the staff members. He did not forget to exchange pleasantries with many visitors at the Exhibition. The President also visited the Ministry of Technology and Research stall which was organised by Minister Patali Champika Ranawaka. The Minister has written 19 books since 1989 and presented several books to the President including his latest ‘Balaya saha Balaya’.

Chairman of the SLBPA, Vijitha Yapa said that the Chinese government has come forward to translate Sinhala books into Chinese and the Chinese books into Sinhala. He added that Sri Lanka has also been able to participate in international book fares in other countries in the recent past. Mr Yapa said that his Association will have two stalls at the prestigious Beijing Book fair which will be held near future and it will be a great opportunity for Sri Lankan book publishers. 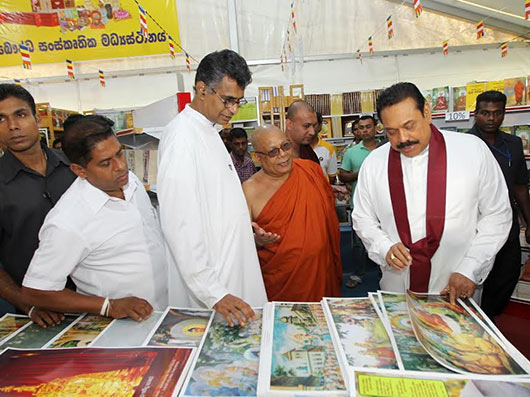 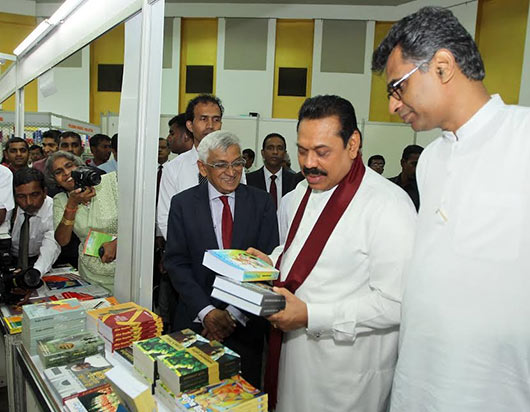