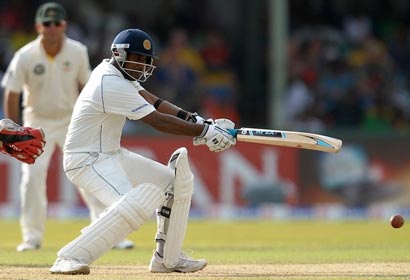 Angelo Mathews crawled to his maiden Test century but Sri Lanka wasted valuable time on the fourth morning in Colombo, where they added only 45 runs to their overnight score. The hosts batted tediously for more than an hour and a half before the final wicket fell with the score at 473, giving them a 157-run lead.

Their main concern was that they had to bowl Australia out a second time and then potentially chase a target, and with just over five sessions left in a match they must win to level the series, time was against them. Mathews finished unbeaten on 105 after he lost three of his final four partners while en-route to triple figures.

The Australians were happy to set the field back, knowing Mathews would not take singles early in an over to expose the No.11 Suranga Lakmal, and it was a long drawn-out process for him to post his first Test hundred. Eventually, he got there from his 229th delivery with a drive through cover for four off Peter Siddle, and it was a relief for a man who had twice been out in the nineties.

The final wicket fell when Lakmal was bowled by Mitchell Johnson for 13, after Siddle picked up the early breakthroughs. Siddle started the day by bowling Shaminda Eranga for 12 with a fullish ball that caught the inside edge and cannoned on to the leg stump, and he followed up by trapping Rangana Herath lbw for 3.

Herath had the decision reviewed but to no avail, and a few overs later Chanaka Welegedara was run out in a major mix-up with Mathews. Welegedara pushed to mid-on and took off for a single but ended up at the bowler’s end alongside his partner Mathews, and the ball was relayed to Brad Haddin who whipped the bails off at the other end.

The session went as well as Australia could have hoped, but their openers were still walking out with a deficit of 157 runs. But on a good batting surface, time could well be on their side.