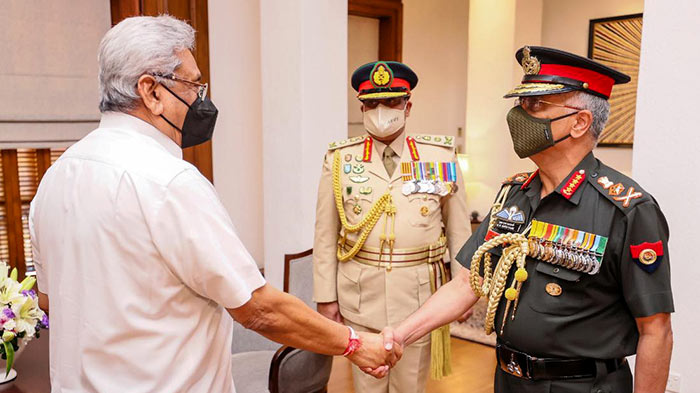 The Chief of the Army Staff of the Indian Army (COAS) General Manoj Mukund Naravane called on President Gotabaya Rajapaksa at the Presidential Secretariat yesterday (13).

Commencing the discussion, General Naravane said that his country highly expects the stability of neighbouring countries for the security of the region.

While reminiscing the training he received in India during his service in the Army and the experiences gained, the President commended the leadership capabilities achieved by Sri Lankan military personnel through the military training they receive in India.

The President inquired from General Naravane about the ensuring of security of India which shares borders with a number of countries, the military welfare in the remote mountainous areas and the ranks of Indian Army officers that would be given leadership training.

The General said that Indian Army officers are given leadership training after being appointed as a Brigade Commander, and explained the retiring age limit of each rank.

Nearly a thousand Sri Lankan Army officers receive military training in India annually. In addition to that, a specially designed training course for 50 Army officers will be provided in the near future at the request  of the Chief of Defence Staff and Commander of the Army, General Shavendra Silva, the Indian Army Chief said.

During the visit, General Naravane recalled the experiences he gained while serving in the Indian Peace Keeping Force at the 4th Mile Post area in Trincomalee.

President Rajapaksa said that he too, as a former Army officer, was pleased to be able to engage in a conversation by recalling such memories.