Step out of traditional politics and fulfil moral responsibility – President 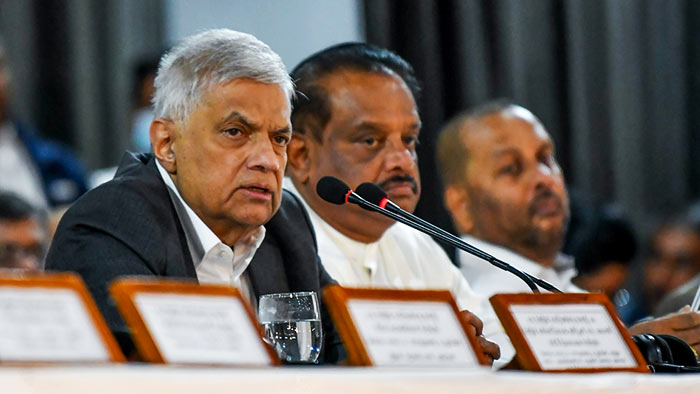 President Ranil Wickremesinghe stressed that everyone should unite to fulfil their moral responsibility for the country, sidelining the traditional political system of trying to grab power at the next election by palming off all the responsibilities on the government.

The President also said that he has not forgotten the difficulties the people are facing today due to the increase in the prices of goods as a result of inflation, and that he will solve the country’s economic problems step by step and provide more relief to the people by next year.

President Ranil Wickremesinghe made this statement during the progress review meeting of the food security district program held at the Nuwara Eliya Town Hall this morning (December 22).

The President requested all to cast aside political differences and join hands in order to make the food security program a success.

President Wickremesinghe said that he has not engaged in politics since assuming the office of President, and assured his commitment to revive the country’s fallen economy by providing relief to the people who are suffering from the high cost of living burden.

Pointing out that the people today have rejected not one group but the entire political system, the President further stated that people’s trust can only be regained by working together and rebuilding the country.

The statement made by President Ranil Wickremesinghe is as follows:

I came to the Nuwara Eliya district today to review the progress of the Food Security Programme. Nuwara Eliya is a very important district for it is one that brings foreign exchange to the country and contributes a lot to the country’s economy through agriculture.

You experienced a shortage of fertilizers last May which we have now overcome. We should also think of the coming year while providing the necessary fertilizers to the farmers since we are facing a food shortage caused by the collapse of the country’s economy. However, due to the war in Ukraine, the entire world will face a food shortage next year, a challenge which we too would have to overcome.

We hope to continue with this Food Security Program throughout the year 2023 since the prices of the food would rise with this global situation. Then only the developed countries could afford food. Under such a situation, we have got to make these activities successful. Today this project has been extended to the village level.

I want to thank you all for the progress that this program has made. We should all work together to carry this program forward. I request the officials to report to us if there are any deficiencies and we provide all the facilities through the Ministry of Agriculture.

Recently, I received a report on the relief that we are to be provided with from the World Food Programme. I hope we will get help from other countries as well.

In addition, the discussions on the debt restructuring program with the International Monetary Fund and private creditors have almost come to an end and with it our problems could be solved. However, we cannot give up this Food Security Program though we solve our issues. We have got to move forward by bringing everyone together to make the program a success.

We hope to allocate money next year to provide the necessary support to prevent malnutrition in certain areas of this plantation. We have established a joint mechanism at the regional level for all these activities. Efforts are being made to involve non-governmental sectors in this regard. All these people should work without politics.

After resolving these issues, I hope to provide more relief to the people in 2023. We have to get through this difficult period to move forward.

We must continue this food security program without political differences. This economic collapse is unprecedented. Therefore, we should unite without politics for the program of rebuilding the economy. Although we have different ideas and opinions, we all have to work together. We should think about it ethically. We have no other option.

I have never been involved in politics since becoming President. Talking to everyone, representing everyone, I am trying to save the suffering people from this crisis.

We should provide relief to all these people living in plantations, villages and cities. Regardless of political differences, we will work together for this purpose.

However, some people still think in a traditional way. They think that if all the responsibilities are assigned to the government, they will be able to grab power at the next election. It doesn’t work. Today people are not only blaming the government, they accuse the entire Parliament. The people are fed up with the political system. We are all responsible for this situation after 75 years.

At present, the youth have distanced themselves from politics. We all have to work together to win their trust. We need to change this entire political system and move forward. Before that we have to eradicate the hunger of the people. People today are suffering from the burden of the high cost of living. If we want to end this situation, let’s correct the mistakes that we have made and move the country forward together.

If we consider the food security program in the Nuwara Eliya District, there is a problem of fertilizer. The farmers have informed us that the fertilizer which they have received is of substandard quality.

Earlier this year, farmers bought fertilizer for Rs. 40,000. With the government’s intervention, currently the fertilizer is being provided at a rate of Rs.16,000. The price decrease is not a result of the drop of fertilizer price in the world market but is due the intervention of the government. We will continue to provide quality fertilizer.

Hon. President, at present, it costs about Rs.65,000 to grow about 66 kg of potatoes. In addition, a seed problem has also arisen. We hope to reduce the price of insecticides and herbicides in the future. We are taking every possible measure to increase food production.