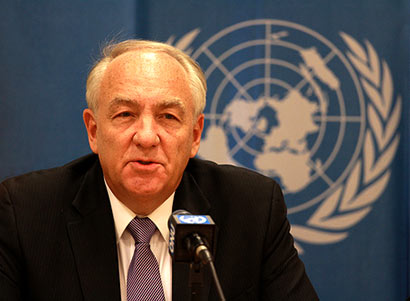 The cliché ‘thick as thieves’ must have been coined with US in mind. Does the US Government and its officials actually believe they have done the world a favor by maiming, killing and making homeless over 20million people since Vietnam? The US Government seems to have a very haughty opinion that the entire world except for America are guilty even if proved innocent and the US thinks it can go bombing people and places to smithereens and get away with it too. Well they can and they have because there is no other country to stand up to challenge them and the UN is ….well just a paid entity doing what its sponsors ask them to do. But is this the way the world is to function. Does it mean that people and nations have to just sit silent and allow not the Americans but a handful of neo-cons to bomb nations into submission, plant their people in the form of UN troops and get their people to act as ‘negotiators’ while another lot plunders the nations installing their people? Can these officials coming to various nations on the pretext of investigating ‘alleged war crimes’ please tell us what the real agenda is about. Stephen J. Rapp of Iowa is Ambassador-at-Large, heading the Office of Global Criminal Justice in the U.S. Department of State but surely he cannot ignore America’s crimes and it does look rather silly to be pointing fingers when the fingers pointing back are too many to count.

Why have none of US crimes against humanity ever been taken up for investigation?

Who gave US the right to apply indiscriminate bombing outside declared war situations and destroying civilian infrastructure and then claim civilian deaths as ‘collateral damage’?

Who gave US the right to use chemical and biological weapons while refusing to sign Conventions against its development and use?

Who gave US the right to not only test but use these chemical and biological weapons WITHOUT informing civilian populations?

Who gave US the right to carry out capitalist based military interventions since 1945 installing puppet regimes and other such un-democratic campaigns?

It is not just military interventions, US thinks it can intervene in foreign elections and has even involved itself in rigging the outcome of foreign elections and even engineering sham demonstrations to ward off voters. The example of such has been in Philippines, Italy, Lebanon, Indonesia, Vietnam, Guyana, Japan, Nepal, Laos, Brazil, Dominican Republic, Guatemala, Bolivia, Chile, Portugual, Australia, Jamaica, El Salvador, Panama, Nicargua, Haiti, Bulgaria, Albania, Russia (1996), Mongolia (1996), Bosnia (1998) and even Iran by overthrowing a democratically elected leader Mossadegh.

The world is not challenging the US, so why is the US challenging the world? Why has US without any provocation undermined peace and human initiatives by routinely going on a wave of violence and using unimaginable methods to crush the enemy?

The US easily has the world’s worst record of human rights both visible and those that take place undercover, underground and through covert and over methods. While US enjoys placing Resolutions against other smaller countries it thinks itself pretty smart not to have any Resolution brought against America.

A good look at some of the Resolutions that US has vetoed through their representatives at the UN will reveal another side of the US.

Stephan Rapp may also like to comment on secret renditions, the torture treatment on uncharged inmates at secret US prisons, the piling cases of ‘collateral damage’ as well as the many assassinations the US has carried out on World Leaders. 40 such foreign heads of state in the last 50 years have been killed by the US and Allies – Patrice Lumumba (Congo), Rafael Trujillo (Dominican Republic), Salvador Allende (Chile) to name a few.

US is the world’s largest provider of live land mines which kill people even in peace time.

US has over 1000 military bases across the world.

Arab Spring has meant arming different Islamic groups and getting them to kill each other while US descends as school monitor and plunders whatever riches that are embedded in these nations. Now Asia is in the next lens for another series of Springs… and it looks like Sri Lanka is the next target as geographically, politically and tradewise it is a very important choke point as well as crucial entry and exit point.

Spare us the speeches on war crimes and associated allegations for we have had about enough of these prepared speeches. Take a good look at what American institutionalized policy is doing to nations of the world. Thankfully the American people are beginning to wake up but then the Government has been quick to set up the legal provisions to take action against the American citizens in a country that has to be the example of what a police state is all about – with cameras and NSA scandals wherever Americans go can America deny this allegation?