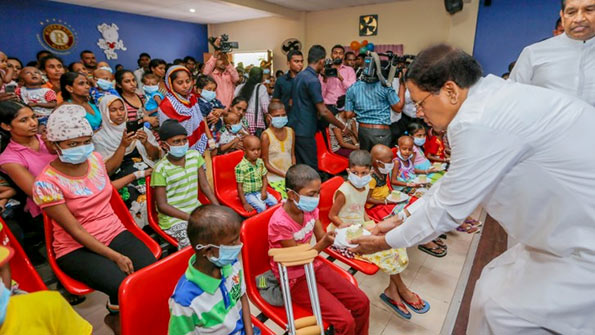 President Maithripala Sirisena says the Cabinet of Ministers should take steps to approve the proposal tabled by him to the Cabinet to increase the tax on tobacco products to 90 percent without taking much time.

The President requested all the Ministers and MPs not to take the responsibility of making whole nation ill by postponing the duties we should fulfill today for tomorrow. He made this request participating at the opening of the newly built building complex at the Maharagama Apeksha Cancer Hospital, on September 03.

The President also engaged in distribution of food for the patients being treated at the Cancer Hospital to mark his birthday which falls on September 03.

The President cut a birthday cake with the children who are being treated at the hospital and also distributed gifts to them.

Later, the newly built six-storied building complex vested with the public by the President.

Addressing the ceremony the President further said that he was the only Health Minister in the world who had to present facts to defend his actions before the directors of the tobacco companies.

As a result of that the people of this country brought him to the position of President, he said.

The President pointed out the importance of paying attention to the prevention of diseases as well as we strengthen the treatment area. He also said that the Government had paid special attention to eliminate the shortage of human resources in the field of health.

Meanwhile, the “Diriya Daru Pranama Scholarships programme” organized  by the Thrift  and Credit  Cooperative Society  of the Health Department was held under the patronage of President Maithripala Sirisena at the National Youth Services Council in Maharagama, September 03.